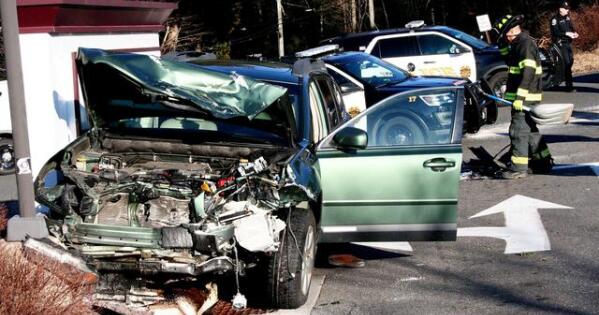 Police report they received a call from security staff at the Stop & Shop supermarket at Sand Hill Plaza, 228 South Main Street in Botsford at about 1:39 pm on February 19 in connection with an alleged case of shoplifting.

Store security staff had spotted Mario John Pizighelli, 58, of Newtown, leaving the store without having paid for more than £270 of merchandise. Police charged Pizighelli with sixth-degree larceny. He was released on a written promise to appear in court on March 5.

While on patrol about 6:44 pm on February 19, police said they stopped motorist Vincent Diverniero, 41, of West Haven, near the intersection of Berkshire Road and Great Ring Road due to an equipment violation on the vehicle that he was driving.

Police issued him an violation for a rear marker plate lighting violation.

Police also learned that Diverniero is wanted by Delaware authorities in connection with some alleged thefts there. Police took Diverniero into custody for planned extradition proceedings. Diverniero posted £50,000 bail, was released, and is scheduled to appear in Connecticut Superior Court in Danbury regarding his extradition to Delaware.

Police said they received a call about 3 am on February 16, reporting that there was an erratic driver traveling on local roads, after which police found the vehicle in question and stopped it near 2 Obtuse Road to investigate.

Police said they charged motorist Ryan Kelly, 31, of New Milford, with driving under the influence, possession of less than one-half ounce of marijuana, failure to have automotive insurance, and driving with a suspended registration.

Following arrest processing, police released Kelly on £1,000 bail for a March 3 arraignment on the charges in Connecticut Superior Court in Danbury.

Police report that at about 2:30 am on February 15, while watching traffic drive by on Main Street, they spotted motorist Ramon Bonaparte, 34, of Bridgeport, traveling southward near Edmond Town Hall.

Bonaparte drove southward through the front perpendicular parking area for that building and then continued southward on the street’s southbound shoulder before entering the correct travel lane near the Main Street flagpole.

Police stopped Bonaparte to investigate, after which they charged him with driving under the influence and failure to drive in the proper lane. After arrest processing, Bonaparte was released on £1,000 bail for a March 3 court appearance.

Police report a two-vehicle accident on Hattertown Road, near its intersection with Saddle Ridge Road, about 5:50 pm on February 14.

Motorist Leonard Rosati, 46, of Monroe, was driving a 2008 Lexus LS-460 sedan northward on Hattertown Road as motorist Robert Bloom, 43, of Redding, was driving a 2001 Honda Accord southward. The Lexus then crossed over the road’s center line and struck the Honda.

Rosati received an infraction for failure to drive to the right.

State police said they received calls about 7:10 pm on February 14 reporting an erratic driver traveling on westbound Interstate 84; upon responding, they found the vehicle in question east of Exit 9. After investigating, state police charged motorist Stephanie Lee Anderson, 45, of New Britain, with driving under the influence, falsifying a marker plate/registration/license, driving under suspension, failure to have automotive insurance, and failure to drive in the proper lane.

About 12:25 am on February 13, motorist Lauren McGuigan, 35, of Bethany, was driving a 2007 Toyota Tacoma pickup truck eastward on Berkshire Road, near its intersection with Old Mill Road, when the truck drove off the left road shoulder and struck an embankment head-on, police said.

The accident is under investigation.

Motorist Kylie Deakin, 17, of Brookfield, was driving a 2016 Kia Forte auto eastward on Wasserman Way, east of its intersection with Nunnawauk Road, on the morning of February 13 when, while negotiating a left curve in the roadway, she lost control of the vehicle on the wet pavement and traveled off the right side of the road, coming to rest about 125 feet off the roadway in a wetland, which had about eight inches of water in it.

There were no injuries. Deakin received an infraction for traveling too fast for conditions.

Police report that while on patrol about 9:09 am on February 12, they stopped motorist Gregory Whitehead, 31, of Monroe, to investigate near the intersection of Toddy Hill Road and Clearview Drive.

Police said they charged Whitehead with traveling unreasonably fast and failure to have automotive insurance. Whitehead is scheduled to appear in court on February 26 to answer the charges.

A three-vehicle accident occurred at the intersection of Sugar Street, Boggs Hill Road, and West Street about 2:47 pm on February 12.

All three vehicles had been traveling westward on Sugar Street.

Motorist Veronica Kroha, 17, of Newtown, who had been driving a 2011 Honda Insight auto behind the Jeep, attempted to avoid hitting the Jeep, but made contact with it, after which the Honda continued traveling and struck a guardpost along the right road shoulder.

There were no injuries. Meeker received an infraction for failure to drive a reasonable distance apart.

About 4:02 pm on February 12, motorist Maria Depaula, 70, of Danbury, was driving a 2014 Honda CR-V SUV westward on Interstate 84, east of Exit 9, when the vehicle drove off the left road shoulder, striking some guard rails on the median, state police said.

There were no injuries. State police verbally warned Depaula for failure to maintain the proper lane.

State police said that at about 4:14 pm on February 12, motorist Wellington Napoleao-Pinto, of Danbury, who was driving a 1996 Dodge Ram pickup truck westward on Interstate 84, made an unsafe lane change and then struck a 2012 Infiniti QX-56 SUV driven by Margaret Martin, 19, of Torrington.

There were no injuries.

Police report a two-vehicle accident on Walker Hill Road about 5:23 pm on February 11.

In that incident, Briana Beller, 20, of Oakville, was driving a 2000 Mercedes-Benz E-430 sedan northward and proceeding downhill into a sharp left curve as motorist Todd Vanderhave, 50, of Sandy Hook, was driving a 2019 Toyota vehicle southward and proceeding uphill into a sharp curve to the right, according to police. The two approaching vehicles then collided. There were no injuries.

Police did not provide enforcement information.

A two-vehicle accident happened on Pole Bridge Road at its intersection with Berkshire Road about 12:32 pm on February 10.

In that incident, a 2014 Ford Transit Connect truck, which was driven by Joselito DeJesus, 46, of Stratford, sideswiped a 2018 Subaru Outback station wagon driven by Paul DeSantis, 34, of Sandy Hook. There were no injuries. Police issued DeJesus an infraction for driving without a license, driving an unregistered vehicle, and unsafe passing.

Police said that at about 5:44 pm on February 10, motorist Asime Zhaku, 34, of Sherman, who was driving a 2015 Hyundai Santa Fe SUV eastward on Church Hill Road, had a green traffic signal at the intersection of Church Hill Road, The Boulevard, and the commercial driveway at 32 Church Hill Road.

At that time, motorist Kaitlin Soter, 23, of Danbury, who was driving a 2018 Mazda CX-5 SUV, had a red traffic signal and was attempting to pull out of 32 Church Hill Road and turn right to enter eastbound traffic flow.

Police are holding for safekeeping two necklaces which were found on February 9 in a commercial parking lot at 5 Queen Street.

Police described both necklaces as yellow. One necklace also has a white stone which is surrounded by metal.

The other necklace has a red stone surrounded by multiple white stones. The owner may contact police at the police station at 3 Main Street, telephone 203-426-5841 to claim the items. A two-vehicle collision occurred at the intersection of South Main Street, Button Shop Road, and the driveway for Plaza South at about 3:15 pm on February, 14, causing travel delays in the area.

Police said motorist Norman Yolish, 83, of Shelton was driving a 2009 Acura RDX northward on South Main Street, as motorist Dustin Mello, 40, of MIlfoird was driving a 2012 Suabaru Outback southward there. Yolish then made a left turn in attemptoing to enter the driveway for Plaza South at 266 South Main Street, police said. The two vehciles collided.

Norman Yoislh received an infraction for failure to grant the right of way. –Bee Photo, Gorosko