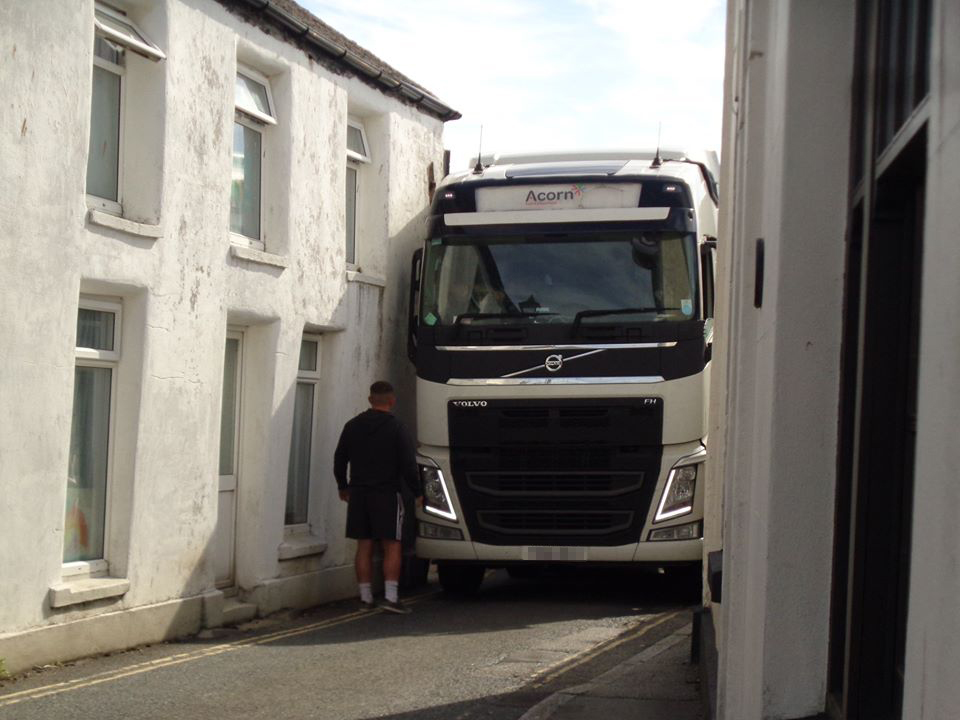 A lorry driver has been caught on camera getting stuck between homes in a Cornish village.

The driver, who told a passerby he was on his way to a local primary school, almost got stuck in the village of Mullion on the Lizard Peninsula.

It is a familiar sight in Cornwall with unsuspecting drivers finding themselves stuck in narrow roads.

Debbie Cheesman-Knaggs – who took these pictures – was one of those on hand who gave the driver instructions to avert a disaster.

Residents watch on as the lorry drives away Credit: Cornwall Live

She said: “The driver was excellent.”

Lots of stress because of an audience, but he kept his cool, listened to instructions from a chap who owns a fleet of trucks and helped direct him, and got out smiling.

“I’ve done my tractor and 40ft trailer licence so I know it’s not easy- but the driver made it look like it was.”

She said that the driver saw the restricted width sign on the village’s streets and called his boss, who told him it would be okay to drive through.

The lorry driver was eventually able to drive away Credit: Cornwall Live

“The driver was dead calm, very focused and not stressed by everyone watching.

She added: “I’d love to know the name of the chap who did most of the directing.

All I know is that he saw the truck go into the village and knew what was going to happen – he told me he owns a fleet of 30 trucks.

“He was awesome helping that driver out. “The driver kept calm under crisis and got the job done with no damage to his own truck or other vehicles or structures.”

Bigger vehicles do become stuck on some of the county’s narrower roads Credit: Cornwall Live

The incident follows a similar one in St Ives last week when a lorry from a company called Keen and Able was trapped for two hours in Ayr Lane.

Witness Dee Lewis said it took about 20 minutes for it to be pulled out backwards.