The UFO encounter that tore a US community apart

As a US family were driving home on a still, warm evening 50-years ago, they had no idea their lives were about to be changed forever.On September 1, 1969, the Reed family claimed they had an encounter with an Unidentified Flying Object (UFO) as they took a shortcut home over the Sheffield Bridge in Massachusetts around 8.30pm.

Thom Reed, who was nine at the time, still remembers what he saw in vivid detail. 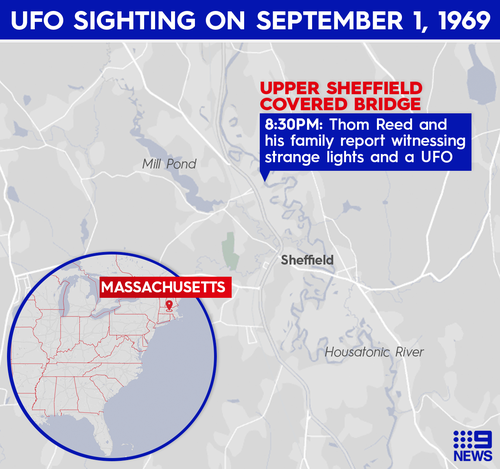 The family were driving home after enjoying a meal at their diner. (Nine)

His mother Nancy Reed was driving and his grandmother was in the passenger seat, he told 9news.com.au. Next to him was his younger brother Matthew – the pair had been sharing lollies. “There was light coming through the bottom boards of the bridge,” he said.

“As we left the bridge and came out the other side we saw what looked like a self-contained sphere of white light and as it rose up maybe two stories there were some rods of light. They fired several thin directional laser-like poles of light from one side to the other. 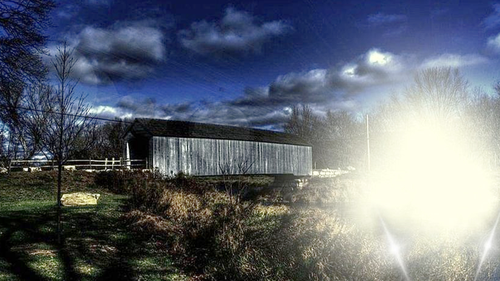 “The light then retracted into it and the sphere slowly moved around the line of trees going in the same direction we were.

“My brother then happened to notice a second round sphere off to the right of the car that looked like it was sitting underwater. “At that point everything felt odd to us. It was almost like being underwater and as the car slowed – you know the tapping sound you get from being in a pool – the sound was stones tapping under the fender of the car.”

Mr Reed said everything then became still and quiet and that’s when the family claims they saw it – a turtle shell-shaped disk hovering over the fields to their left. 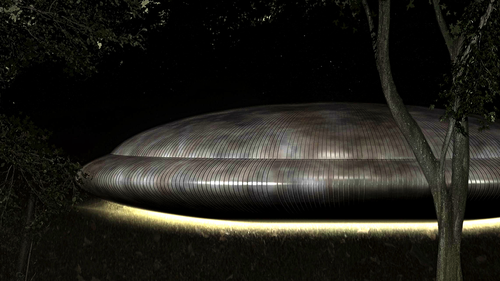 A depiction of what Mr Reed and his family claim to have seen that night. He claims the disk was “silently hovering”. (Supplied: Thom Reed)

The three objects – the two spheres of light and the shell – made a triangle with the Reeds’ car bang in the middle of it.

The car suddenly exploded with light, Mr Reed said, almost like floodlights had been shone on it. He explained to 9news.com.au everything was illuminated in glaring detail. A cacophony of noise erupted as crickets and frogs burst into frantic activity on the banks of the Housatonic River.

A detailed representation of the UFO the Reeds claim to have seen. (Supplied: Thom Reed)

That was the last thing Mr Reed and his family remember for three hours, bar vague visions of what resembled an airplane hangar – describing it a large open area that was much larger than the craft was itself.

When the family finally came to, Nancy Reed and her mother had mysteriously switched positions in the car. “The car ignition was off and the lights were off,” Mr Reed said.

A community fractured and faith lost

That night across Berkshire County, about 40 residents from multiple towns reported seeing a UFO – but instead of bringing the community together, it tore it apart. The sightings are the focus of an episode from Netflix’s new series Unsolved Mysteries, which details the encounters of Tommy Warner, Melanie Kirchdorfer, Jane Green and the Reed family. Mr Reed told 9news.com.au he never felt like he belonged in the small town. 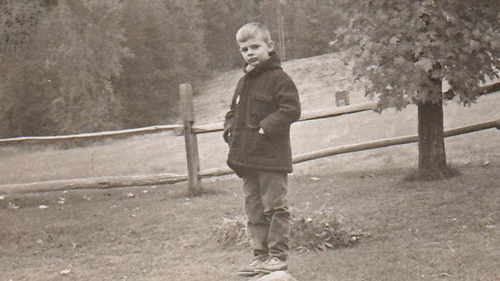 Mr Reed was the most vocal of the family after the encounter and claimed he had seen UFOs several times in Sheffield throughout the 1960s. The nine-year-old said he experienced rampant bullying for speaking about his experience. 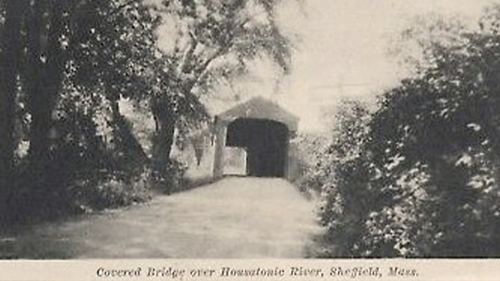 Some locals had trouble accepting what the family said they saw that night. (Supplied: Thom Reed)

His family was also harassed, and at one point, Mr Reed said they were regularly followed by a white pick-up truck. “There were a lot of fights,” he said.

“The cops had to eat in our diner to keep the peace…it divided the community. “We went through a lot there was a lot of struggles. The pain and hardship came from some of the locals.

“What I saw changed my life. I used to be an altar boy… I don’t have my faith anymore.

It’s gone. You start to think why are we here and what all this means.” 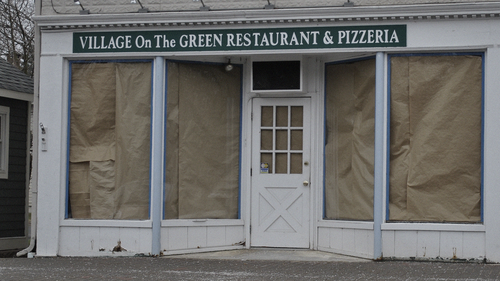 Less than a year after the sighting the family sold their diner and moved to another town. (Supplied: Thom Reed)

Less than a year after the encounter Mr Reed’s mother sold the family diner “The Village on the Green” and relocated the family to Great Barrington, Massachusetts.

In February 2015, the Great Barrington Historical Society and Museum confirmed the Reed sighting and officially inducted the case into US history. In doing so, Mr Reed, who had sat a polygraph and passed, was finally vindicated. 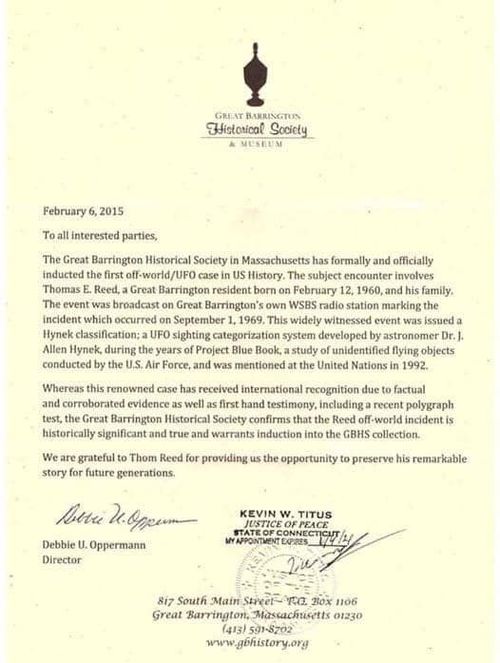 Mr Reed supplied letters confirming his sighting had been inducted into US history. (Supplied: Thom Reed)

A concrete monument was erected outside the bridge to commemorate their sighting. Mr Reed now manages the Thom Reed UFO Monument Park.

It’s a feat he couldn’t do without the support of sponsors – something he is extremely grateful for. 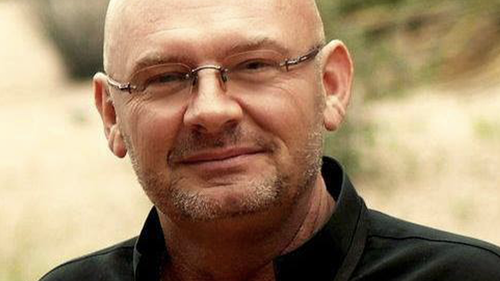 Mr Reed is thankful for the support he receives today. (Supplied)

‘Who knows what happened’

Mr Reed still doesn’t know what his family saw that night, but he has his theories. 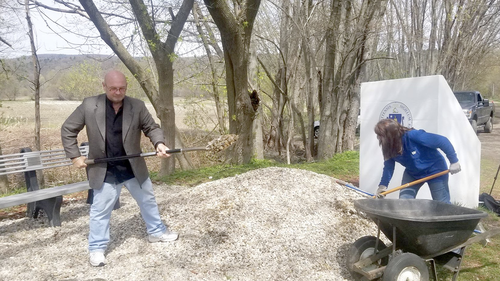 A monument was erected near the bridge to commemorate the sighting. (Supplied)

“Do I think there was an off-world presence that caused us to be removed from the car? Absolutely 100 per cent,” he said.

“I can tell you I saw something extraordinary and we were surrounded. The spheres were certainly working in conjunction with the craft – and both of these spheres were overwater. “Do I think there was also a military or governmental aspect also involved?

More than likely. “At the end of the day, do aliens know how to shut our car off?” However, Mr Reed said he is open to the fact there could be an environmental explanation. 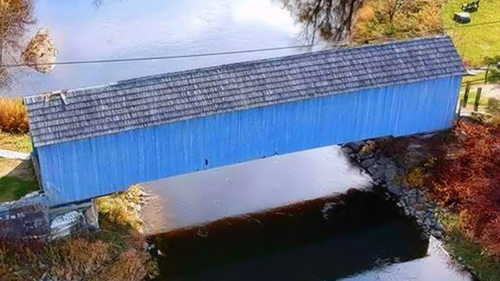 He claims the bridge sits over some of the most polluted water in America. (Supplied: Thom Reed)

“The magnesium that was mined for the atom bomb [in World War II] was mined three miles (five kilometres) from our restaurant over in Connecticut,” he said.

“There was also a lot of military. We also had command aerospace, Electric Boat which made the nuclear submarines, General Electric. “You had some of the most polluted water in the entire country in the Housatonic River.

It’s so bad you can’t eat fish out of it.

There’s toxic waste in that waterway.

“Who knows what happened”.