What's the future of theatre? A Scottish seaside town may have all the answers

Packed shoulder to shoulder with your neighbour, elbows jostling for position on the armrest, knees pressed up against the seat in front, your view blocked by a column – the West End theatre experience can be claustrophobic at the best of times. Now that theatres have been given the green light to reopen, with their share of a GBP1.5bn support fund in the offing, how on earth can these historic venues adapt to a socially distanced post-Covid future?

For Cameron Mackintosh, the hit musical producer and owner of eight historic theatres in London’s West End, it’s an impossible prospect. “Until social distancing doesn’t exist any more, we can’t even plan to reopen,” he said in June, when he announced that all of his venues would remain shuttered until at least 2021. For an industry that relies on packing people in as tightly as possible to create an electric atmosphere, social distancing is surely its death-knell.

Scottish architect John McAslan thinks there might be another way, and that theatre designers are well placed to rise to the challenge. “Architecture seems to have been lost in any kind of strategy,” he says. “There’s been an acceptance of the problem, and a lack of imagination in terms of looking at how it could be done differently.” 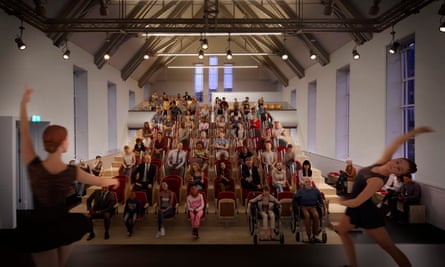 McAslan, architect of the celebrated Roundhouse in Camden, London, has been working on designs for a new kind of theatre seat for a small community venue in his home town of Dunoon in Argyll, which he thinks could be a prototype for countless other venues. Dunoon’s Burgh Hall was the first theatre in the region when it opened in 1874, and it might now be the site of the first post-viral theatre seat.

“It’s a bit like a 1930s lounge seat,” McAslan explains. “It’s slightly wider than a usual theatre seat and double-raked, with each row separated by two steps rather than one.” The chief visible difference is a removable transparent acrylic screen that wraps around the sides and back of each seat, providing a psychological buffer between members of the audience, if not a full-height cough-proof barrier. “It’s to give a sense of visual connection, but physical separation,” says McAslan. “Part of this is getting people feeling comfortable with the idea of sitting side by side with strangers again.”

After falling into disrepair for decades, the Burgh Hall has taken on a new life as a contemporary arts centre since it was refurbished in 2017, and has remained active through the lockdown, with volunteers leading a community kitchen for the town. McAslan sees the new seating plan (which is still awaiting funding) as a pilot project for how other venues could be reconfigured across the UK.

In his eyes, the pandemic is an opportunity to improve a range of practical issues that have long plagued antiquated auditoria.

“The West End is full of wonderful historic theatres, but they’re now completely outmoded,” he says. “People are four inches taller than when they were built, so the seats are too small, the sight lines are terrible and a huge number of seats are restricted by columns. The air is bad and the loos and bars are always too small to cope. With the government’s funding announcement, now is the time to make them fit for purpose.” 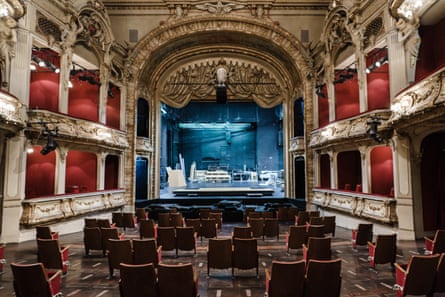 ‘It scared the crap out of everyone’ … the Berliner Ensemble auditorium with stripped-out seats. Photograph: Clemens Bilan/EPA

Gavin Green, co-founder of theatre consultancy Charcoalblue, has been working with a number of theatres to consider their reopening strategies. “The situation has changed dramatically in recent weeks,” he says. “In early June there was an experiment in Berlin to strip out a theatre auditorium to two-metre spacing between the seats, and I think it scared the crap out of everyone.

It looked so stark and empty.”

He says the recent relaxation in government guidance to one-metre distancing could be a game-changer. “It changes a theatre’s potential capacity from about 33% to more like 67%, which begins to look possible. It’s still not quite enough to make the top-end commercial shows stack up, but it starts to look like a real audience, rather than playing to an empty room.” In practical terms, it is the difference between removing three seats in every four, compared with just one. In most theatres, every other row would no longer have to be removed.

Green has also been working on plans for a touring outdoor pop-up deckchair theatre, made from an easily disassembled kit of parts. “The key thing is to keep it simple,” he says. “The moment you go outdoors, you’re talking huge sums of money with lighting and rigging, but we need something light on its feet.”

He points to an example in Leeds, by the Holbeck community theatre Slung Low, which recently laid on a family-friendly performance in a car park on the back of a flatbed lorry.

Each family had a little blue tent and a pair of chairs, roped off in a safely distanced grid with festive bunting. 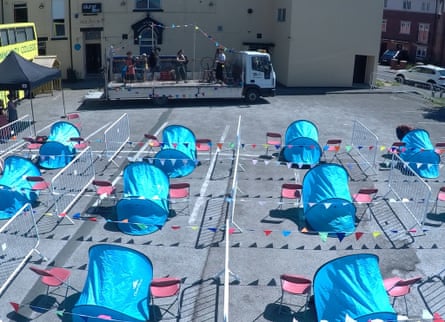 Three! By Wrongsemble hosted by Slung Low in Leeds, playing off a flatbed truck with the audience using tents. Photograph: Slung Low

“This was not a reopening of our theatre,” says Slung Low’s artistic director, Alan Lane, explaining it was a continuation of their work leading social care in the area. “Every day we deliver hot meals to 20 families in our local area, feeding 65 children. We’ve seen how they have coped with the time away from school, the impact of legislation, the diet of sausage and chips four days a week and the endless tension in the air.

So we decided we would do something that might help – a date to look forward to, a change of activity, a moment of respite.”

Set designer Es Devlin agrees that this is a time to be fundamentally rethinking the wider role that theatre can have, and look at how existing theatre infrastructure could be adapted to better serve a broader public audience.

“West End theatre buildings occupy the most central city locations and yet are only open to the public for around three hours on most days,” she says. “Their architecture still expresses a time when it was socially acceptable for those on lower incomes to be funnelled through their own separate entrance. We’ve been asking: could they be altered, in the same way that Victorian and Edwardian housing is so regularly remodelled, to give more direct access from the stage to the street? Could the top tier of seats with the worst views be converted into a civic space where a community might gather pre and post-show?

Could we pierce through the walls to create a shop window, where stage sets become magnificent artworks viewed from the street through art gallery windows?”

Devlin has form in reimagining what theatre can be. She has authored some of the world’s most audacious production designs, from a rotating glass box for the Lehman Trilogy to a gigantic tongue-shaped slide for Miley Cyrus’ stadium tour, and she is already working on what a socially distanced arena audience might look like. 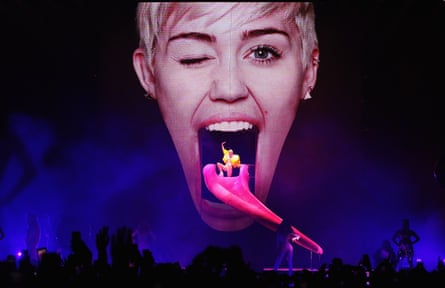 “We have been trying to find beauty within the new and necessary audience geometry for stadium concerts,” she says, “by overlaying projected linear patterns that both guide the audience to safe viewing spaces, and also form a beautiful network when viewed from an aerial camera.” She imagines this aerial view of the audience could be projection-mapped as a backdrop to the performance on stage, “so the audience taking responsibility for one another’s health becomes a visual statement in itself. In a way it’s a kind of renewal of the vows between audience and performer – a move away from audience as customer or consumer.”

Ray Winkler, director of entertainment architects Stufish, longstanding designers of stages for the Rolling Stones, U2 and Madonna, strikes a note of caution. He thinks that post-Covid venues can only be as good as their weakest link – the surrounding infrastructure concertgoers use to get there. “The question is more psychological than physical,” he says. “You could have a perfectly good venue, but you still have to get on to public transport, or queue with 5,000 other people, or have massively long entry times.

It’s not to say we can’t rise to that challenge, but we can’t just be greasing one cog at the expense of looking at the overall mechanism.”

Steve Tompkins, the co-founder of architects Haworth Tompkins who was named the most influential person in British theatre last year, is cautiously optimistic. Having completed countless theatre projects, from the Royal Court to the Young Vic, Liverpool Everyman and Battersea Arts Centre, the practice is now working on a new research and performance building for the American Repertory theatre at Harvard University.

The architects have been working alongside the Harvard School of Public Health, looking at how theatres might mitigate the coronavirus risk before a vaccine comes along.

“It has allowed us to use the project as a live research test bed,” says Tompkins, “asking what theatres might have to do in a time of pandemics – which might not just be this one.” He says that displacement ventilation is one of the key principles, so that fresh air comes in from below and is exhausted through the roof (as at the practice’s Everyman theatre), rather than allowing it to drift across the audience and spread the virus, along with better filtration, and slightly higher humidity and temperature.

He points to the technical interventions planned by the London Palladium, which proposes to introduce infrared cameras at the stage door along with antiviral fogging machines and an app-based “medical passport” for ticket-holders.

“Theatre makers are incredibly resourceful and designers are incredibly imaginative at making theatres work,” he says. “I don’t feel pessimistic. With the relief with the funding, I believe it will unleash a wave of new creativity and imagination.”