A massive explosion has rocked Beirut, flattening much of the port, damaging buildings across the Lebanese capital and sending a giant mushroom cloud into the sky. While the cause of the blast was not immediately clear, speculation suggested an accidental explosion linked to the storage of dangerous chemicals, although US president Donald Trump said American military officials felt it may have been a bomb attack. At least 70 people were killed and 3,000 injured, with bodies buried in the rubble, officials said.

The blast sparked fires, overturned cars and blew out windows and doors. It struck with the force of a 3.5 magnitude earthquake, according to Germany’s geosciences centre GFZ, and was heard and felt as far away as Cyprus more than 180 miles across the Mediterranean. Lebanon’s interior minister Mohammed Fahmi said it appeared a large cache of ammonium nitrate in the port had detonated.

Mr Fahmi told a local TV station it appeared the blast was caused by the detonation of more than 2,700 tons of ammonium nitrate that had been stored in a warehouse at the dock ever since it was confiscated from a cargo ship in 2014. Witnesses reported seeing a strange orange-coloured cloud over the site after the explosion. Orange clouds of toxic nitrogen dioxide gas often accompany an explosion involving nitrates. 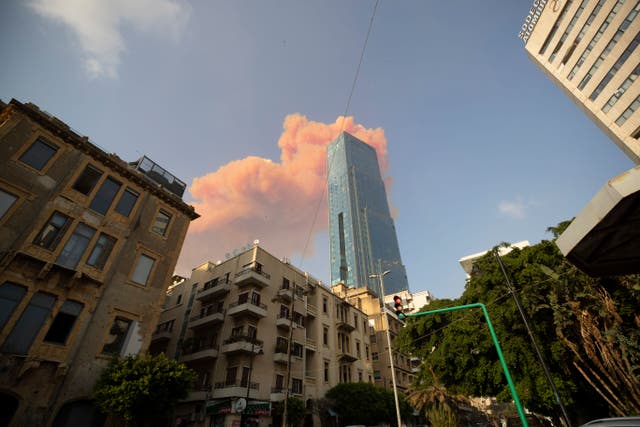 Mr Trump, however, said US military generals had told him they “seem to feel” the explosion was the result of a “terrible attack” most likely caused by a bomb.

“It would seem like it based on the explosion,” Mr Trump told reporters in Washington. “I met with some of our great generals and they just seem to feel that it was. This was not a — some kind of a manufacturing explosion type of a event.

They seem to think it was a attack. It was a bomb of some kind, yes.” Mr Trump offered condolences to the victims and said the United States stood ready to assist Lebanon. “It looks like a terrible attack,” he said.

An Israeli government official said Israel “had nothing to do” with the blast. He spoke on condition of anonymity because he was not authorised to discuss the matter with the media. The blast was stunning even for a city that has seen civil war, suicide bombings and bombardment by Israel.

It could be heard and felt as far away as Cyprus, more than 180 miles across the Mediterranean. 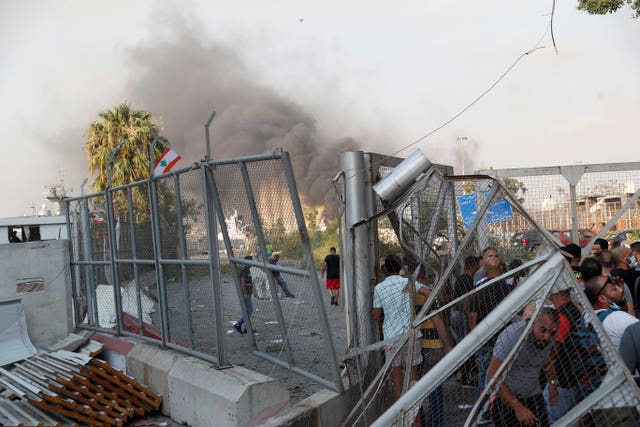 Paola Rebeiz was watching television when the blast hit her home in St Nicolas, around a kilometre south of the site of the explosion, shattering all of her windows. “People have died on my street… my neighbours told me not to go down to the ground because there are dead bodies on the street after glass fell on them,” Ms Rebeiz, a PR consultant, told the PA news agency. “The house shook.

I don’t have electricity I don’t have water. It’s been non-stop sirens since the explosion.” Emergency teams streamed in from across Lebanon to help, and injured had to be taken to hospitals outside the capital.

Some of those injured lay on the ground at the port, Associated Press staff at the scene said. A civil defence official said there were still bodies inside the port, many under debris. Beirut’s governor, Marwan Abboud, broke into tears as he toured the site, saying, “Beirut is a devastated city.” 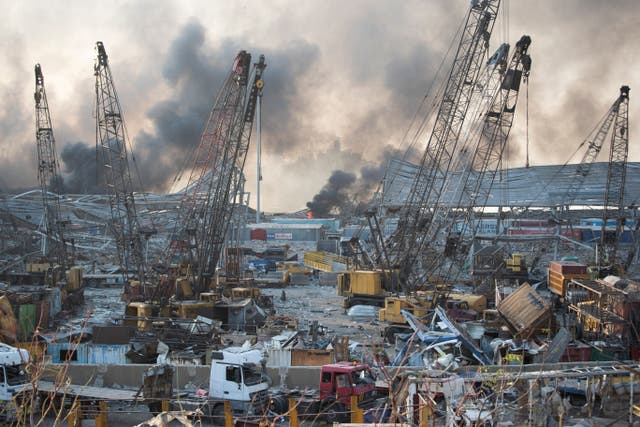 Initially, video taken by residents showed a fire raging at the port, sending up a giant column of smoke, illuminated by flashes of what appear to be fireworks.

Local TV stations reported that a fireworks warehouse was involved. The fire then appeared to catch at a nearby building, triggering a more massive explosion, sending up a mushroom cloud and a shock wave. Charbel Haj, who works at the port, said it started as small explosions like firecrackers.

Then, he said, he was thrown off his feet by the huge blast. His clothes were torn. Miles from the port, building facades were shredded, balconies were knocked down and windows shattered.

Streets were covered with glass and bricks and lined with wrecked cars. Motorcyclists picked their way through traffic, carrying the injured. The blast came at a time when Lebanon’s economy is facing collapse from the financial crisis and the coronavirus restrictions.

Many have lost jobs, while the worth of their savings has evaporated as the currency has plunged in value against the dollar. The result has thrown many into poverty. It also occurred amid rising tensions between Israel and the militant Hezbollah group along Lebanon’s southern border. 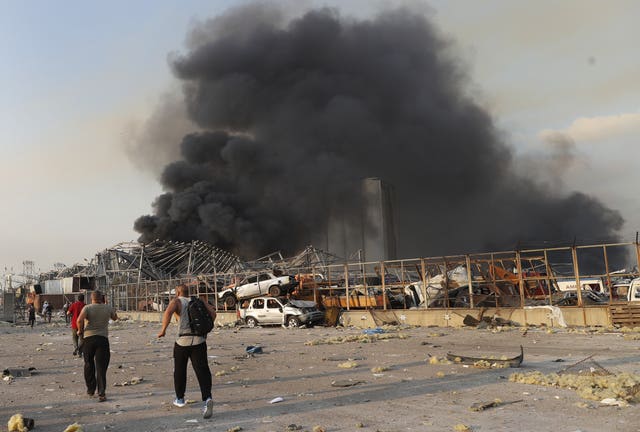 Several of Beirut’s hospitals were damaged.

Roum Hospital put out a call for people to bring it spare generators to keep its electricity going as it evacuated patients because of heavy damage. Outside the St George University Hospital in Beirut’s Achrafieh neighbourhood, people with various injuries arrived in ambulances, in cars and on foot. The explosion had caused major damage inside the building and knocked out the electricity at the hospital.

Dozens of injured were being treated on the spot on the street outside, on stretchers and wheelchairs.

The explosion was reminiscent of massive blasts during Lebanon’s civil war and took place only three days before a UN-backed tribunal was set to give its verdict in the killing of former prime minister Rafik Hariri in a truck bombing more than 15 years ago.

That explosion, with a ton of explosives, was felt miles away, just like Tuesday’s blast.