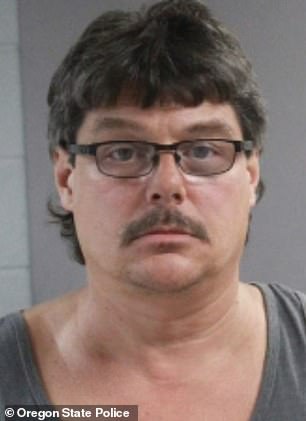 Kenneth Ayers, 49, of Roseburg, Oregon, has pleaded not guilty to attempted murder and assault charges

A UPS truck driver randomly shot at several passing vehicles along a southern Oregon interstate on separate occasions over the last three months and wounded one person, according to state police.

Kenneth Ayers, 49, of Roseburg, Oregon, was taken into custody on Thursday – a day after the most recent shooting.

A woman driving along Interstate 5 suffered a gunshot wound on Wednesday. She was treated and released from a local hospital, according to state police.

Investigators located a tractor-trailer about 60 miles north of where the shooting took place.

A search of the truck revealed a gun that matched the weapon that fired the bullets in the previous shootings, according to Oregon State Police.

Police refused to say how the truck was located. Investigators also declined to specify the type of firearm used in the shootings, according to The New York Times.

Ayers pleaded not guilty on Friday in a Jackson County courthouse to several charges stemming from Wednesday’s shooting, including attempted murder, assault, and several counts of unlawful use of a weapon.

He was ordered held on £1million bail.

Ayers made his court appearance virtually on Friday.

He asked the court to provide a defense lawyer.

‘The only thing I had a chance to talk to was my wife,’ he said.

The seven shootings were spread out over several locations in Jackson, Douglas, and Josephine counties in southern Oregon.

Police said prosecutors and investigators from all three jurisdictions have been cooperating.

‘We are appalled to hear about these allegations and are fully cooperating with the responding authorities,’ a UPS spokesperson said.

‘Firearms are prohibited at UPS facilities and in our vehicles, and we are extremely concerned for the other motorists and individuals who have been affected,’ the statement said.

Police said the first shooting took place on May 12, which was a short time after Ayers was given a new delivery route that required him to drive along Interstate 5.