FREDERICK, Md. – Does diesel have a green future? Yes, according to some of the companies involved in developing new technologies. Diesel is still the primary fuel choice for the trucking industry, and advocates have been pointing out recent scientific advances that made it much cleaner.

At a webinar hosted by the Diesel Technology Forum (DTF) on Thursday, executives from Bosch, Tenneco and Umicore showcased some of the tools they believe will help achieve even lower emissions and greater efficiency.

Third, an expanded use of renewable flows, and then finally, hybridization where possible,” he said. Tenneco, a leading manufacturer of clean air and powertrain products, is developing new engine components that it said will help reduce friction and improve fuel economy. 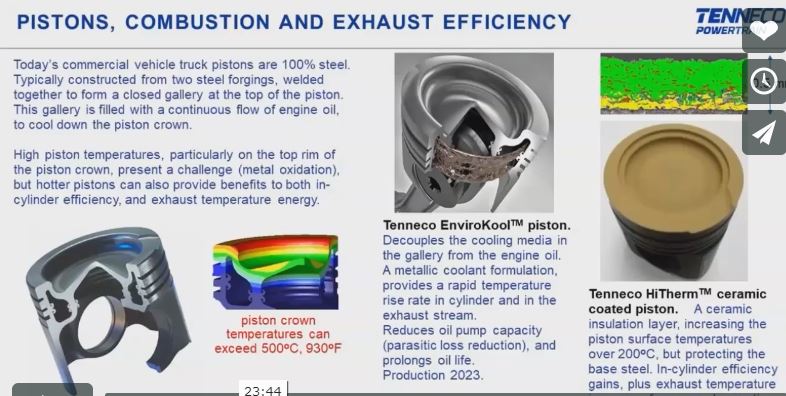 These new components could be in production by 2023. (Screen grab)

They include Tenneco EnviroKool piston and HiTherm ceramic coated piston, said Keri Westbrooke, vice-president and chief technology officer for powertrain at Tenneco. The new pistons could be in production in two-to-three years, he said.

Greg Garr, director of market creation at Umicore Autocat USA, which makes automotive catalysts, said diesel engines will be around for a while because they have proven to be reliable, and they have proven how useful they are. “And if we can get the CO2 down and get the NOx down, then I don’t see why they shouldn’t be very competitive with other technologies going forward.” One of the panelists, Dmitri Konson, vice-president of engineering at Tenneco Clean Air, said the industry would like to see a global harmonization of regulations.

“We need to try to avoid uncertainty.

I think uncertainty is what makes us most nervous,” he said.