U.K. Begins Rollout of Pfizer’s Covid-19 Vaccine in a First for the West

CARDIFF, Wales–The U.K. became the first Western country to start distributing a Covid-19 vaccine to its population, rolling out a mass inoculation program that could provide a template for other countries, including the U.S., of the practicalities and potential pitfalls of vaccinating at speed and scale. Less than a week after Britain granted emergency-use authorization for the two-dose vaccine developed by Pfizer Inc. and Germany’s BioNTech SE, the first people began to receive it across the U.K. on Tuesday. Those over 80 years old, nursing-home workers and other high-risk health-care staff were front of the line: a group estimated to number six million.

The rollout is being paid for by the U.K.’s state-funded National Health Service and modeled on its annual flu-vaccination campaign.

Ninety-year-old Maggie Keenan was the first to receive the initial dose as part of the program, according to the NHS.

“It’s history and the best thing that’s ever happened. If I can do it, so can you,” she said at University Hospitals Coventry and Warwickshire, central England, wearing in a mask and a Merry Christmas t-shirt. Coming just days ahead of the Pfizer vaccine’s expected authorization in the U.S., the U.K. rollout could be an indicator of the challenges faced by American doctors in getting it into the population.

Aversion to vaccines in the U.K. remains below antivaccination sentiment in the U.S. In an Ipsos poll in October, 79% of people asked in the U.K. said they would take a Covid-19 vaccine if one were available, compared with 64% in the U.S.

Among the first to be invited to receive one of the initial 800,000 doses of the shot that arrived from Belgium were people over 80 who had existing appointments for other procedures–and whose age puts them at greater risk from the coronavirus. The U.K. has ordered 40 million doses of the vaccine, enough to inoculate 20 million people with two doses each.

But the complex delivery process of the new shot–which requires a precisely timed deployment through an elaborate, temperature-controlled supply chain–has restricted the first stage of the rollout to 50 hospital hubs in England and a small number of other sites in the rest of the U.K. The government estimates it will receive seven million shots by the end of the year, depending on the production process, down from 10 million it forecast in November.

The U.K. became the first Western nation to vaccinate patients against Covid-19. WSJ explains how the country is planning to roll out the BioNTech-Pfizer vaccine at record speed, making it a test case for the rest of the world.

More than 60,000 people have died from the virus in the U.K., with at least 17,000 of them among nursing-home residents in England and Wales, according to the Office for National Statistics. Plans to get the vaccine immediately to the most vulnerable in nursing homes are complicated by the need to keep it in sub-Arctic temperatures.

The shots use a new technology called mRNA, which carries genetic instructions to cells, and must be stored at minus 70 degrees Celsius, or minus 94 degrees Fahrenheit, to maintain their integrity. Once thawed, the vaccine can be used within five days if it is kept at 2-8 degrees Celsius, Pfizer says.

At room temperature, that window shrinks to two hours, according to the drugmaker’s data.

What will you be looking to learn from the U.K.’s experience with the vaccine rollout? Join the conversation below.

The NHS has said it plans to start administering shots in nursing homes before Christmas once it has overcome various logistical hurdles. Local doctors say they haven’t received instructions on how to get doses to nursing-home sites safely.

Still, despite the obstacles, starting next week the British government wants to distribute the doses via a network of local physicians, known as general practitioners. When more doses become available, it plans to open mass-vaccination centers in conference venues and gymnasiums. The government changed the law to allow student doctors, physiotherapists and dental workers to administer the vaccine.

Some of those administering it at a Covid-19 testing-turned-vaccine center in Cardiff on Tuesday said it was trickier to use than the flu vaccine because it doesn’t come in ready-to-go shots. “This one comes in big vials that have to be brought from the freezer to our specialist fridge, that needs to be monitored by a pharmacist, vials need to be dated, temperatures measured,” said Lynne Cronin, a 60-year-old nurse.

The NHS has also appealed for retired doctors and nurses to help out and for thousands of volunteers to train as vaccinators and support staff. 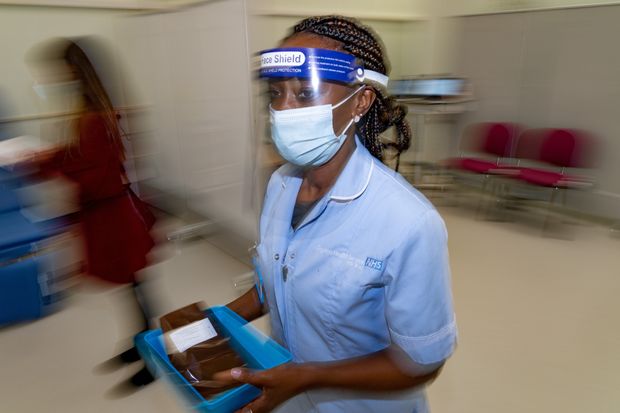 Across the country, nurses and other medical staff administered the vaccine to many of those deemed most vulnerable.

Kate Bingham, head of the U.K. government’s vaccine task force said that delivering the vaccine was a “monumental challenge.”

But the U.K. is probably the most well-prepared country in the world to actually receive these vaccines and deploy them, she told the British Broadcasting Corp. on Tuesday. Last week, Dr. Anthony Fauci, director of the National Institute of Allergy and Infectious Diseases, apologized for appearing to suggest that the U.K. was moving too fast in authorizing the vaccine.

Some of the U.K.’s experts in vaccinology warn about the need for caution, space and trained specialists to prepare the vaccine. “That space certainly isn’t in a nursing home,” said Beate Kampmann, director of the London School of Hygiene and Tropical Medicine’s vaccine center.

Patients need two doses of the vaccine, so the first receiving it Tuesday will be called back in three weeks, between Christmas and New Year’s Day, just as others are coming in to get their first shot. “This all needs to be recorded very, very carefully,” Dr. Kampmann said, so that any adverse effects can be monitored. The U.K. has a Yellow Card system for reporting reactions to medicines and vaccines equivalent to the Vaccine Adverse Event Reporting System in the U.S.

Local doctors say they have been told to use the doses they receive, which arrive in 975-dose blocks, within 3 1/2 days. 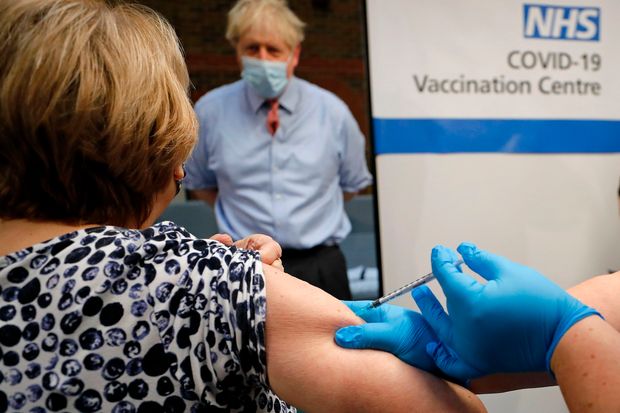 Prime Minister Boris Johnson was in attendance at London’s Guy’s Hospital as some of the first Britons received Covid-19 vaccines on Tuesday.

Some doctors say they don’t have enough patients aged over 80 on their books to use all the doses in time, and others worry about delivering so many vaccines and handling the accompanying paperwork on top of their usual case load. Helen Salisbury said her practice in Oxford, central England, has been inundated with calls from people wanting to know when they can get vaccinated.

More on Vaccines and the Pandemic

Beat the U.S. and Europe to a Vaccine

“There’s quite a lot of pressure to get it to the people who need it most, the care-home residents and the very elderly, but there’s no point taking it there if it’s not going to be any good once it gets there,” she said. “You’ve got to make sure that the cold chain but also the stability chain is up to it.”

The shot’s path into the arms of Britons entails complicated, delicate, ultra-cold-chain logistics after its manufacture in Belgium. Arriving by truck in ultralow-temperature freezers, the vaccine comes packed in isothermic boxes containing dry ice.

It then goes through a 12-24-hour quality-control process conducted by specialists in medical logistics to ensure the necessary temperatures for transportation have been maintained on the journey and the vaccine kept viable.

Boxes are opened and temperature data recorded before the doses are sent out, still frozen, to the distribution sites and stored again in ultralow-temperature freezers. The vaccines, which must be kept upright and away from long exposure to light, are ordered via an online system.

The vaccine must be thawed for three hours–or for 30 minutes up to 25 degrees Celsius for immediate use–and then diluted with sodium chloride solution. To marshall demand for the initial vaccines, some hospitals in the U.K. are asking staff to apply for appointments online.

One in southern Wales asks staff to complete an online questionnaire to find their “Covid age,” a risk score used to assign vaccine appointments to those who need the shot the most based on age, body-mass index, ethnicity and other factors.

Linda Roach, 61, arrived early for her vaccination on Tuesday morning at the center in Cardiff.

She works in reception at the emergency room of the University Hospital of Wales and said she had “been really looking forward to it.”

“I just wanted to get the vaccine and know that I will be safer in my work environment,” she added.

Buckingham Palace said it wouldn’t comment on speculation in local media that Queen Elizabeth II and Prince Philip would inform the nation once they had received the vaccine.

The monarch and her husband are in their 90s.

Jemima Olchawski, a 36-year-old head of a nonprofit in London, said although she was at the bottom of the pile to receive it, the vaccine “feels like the beginning of how we move out of this.”

“This is an incredibly important moment on the march out of this pandemic,” he told the BBC. “But we’ve still got a long march to go this winter, and people need to keep respecting the rules and try to live in a way that if you have the virus, it infects as few people as possible.”

Write to Joanna Sugden at joanna.sugden@wsj.com and Will Horner at William.Horner@wsj.com