Our planet is changing. So is our journalism. This story is part of a CBC News initiative entitled Our Changing Planet to show and explain the effects of climate change and what is being done about it.

As world leaders at COP26 in Glasgow hammer out the final details of a new action plan to tackle climate change, the nearby Scottish city of Dundee is already offering a glimpse of what a zero-emission future might look like.

For Public Works manager Bob Donnachie, it’s a big blue electric garbage truck — or a bin lorry, as the Scots call them.

“It’s very different from a conventional diesel truck, I must admit,” said Donnachie, taking CBC News out for an unusually quiet drive through the city. “You don’t have the rattles and bangs as you normally do.”

Dundee purchased six electric garbage trucks and then held a contest to have schoolchildren give them electricity-related names.

CBC News was given its tour in “Dr. Watts,” playing off a Sherlock Holmes theme. Another is “Leonardo Di Chargio,” after the actor and environmental activist. Dundee — a city of 150,000 about 125 kilometres northeast of Glasgow — is a former industrial town that has successfully transitioned into a hub for tech startups and medical research. 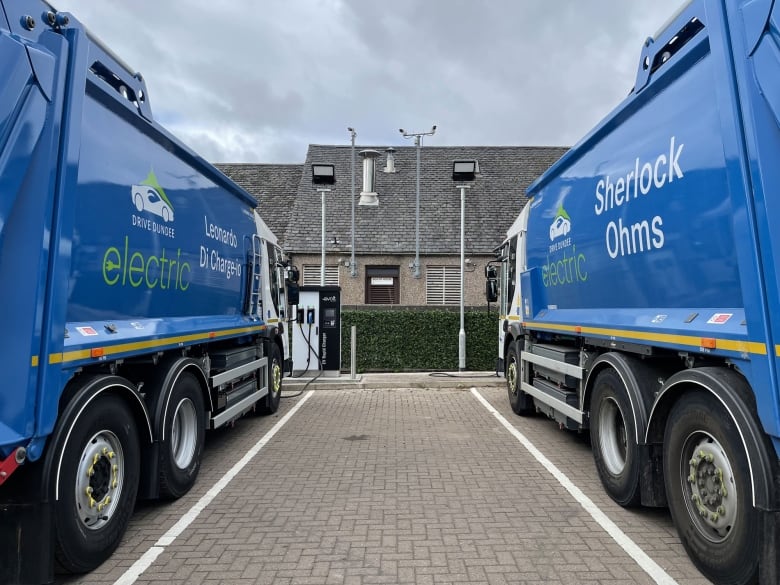 These are two of six new electric garbage trucks in Dundee, Scotland.

The city is about one-quarter of the way through converting its municipal fleet of 180 vehicles over to zero-emission vehicles. (Stephanie Jenzer/CBC)

Today, it’s already about one-quarter of the way through converting its municipal fleet of 180 vehicles — from garbage trucks and street sweepers, to vans and cars — over to zero-emission vehicles. “We’re the vanguard of moving over to e-mobility of any city in Europe,” said Fraser Crichton, manager of Dundee’s municipal vehicle fleet.

Planning for years down the road

Dundee has also invested more than GBP3.8 million (£7 million Cdn) to build electric-vehicle charging stations at strategic points across the city. “The infrastructure has to come in first before people will then start buying into it,” said Crichton. While EV chargers can be big and bulky, many of Dundee’s stations are actually kept out of sight.

At a parking lot next to the River Tay, chargers are embedded in the concrete at curbside, flush with the sidewalk; they pop up when a driver pulls up and activates them through a phone app. 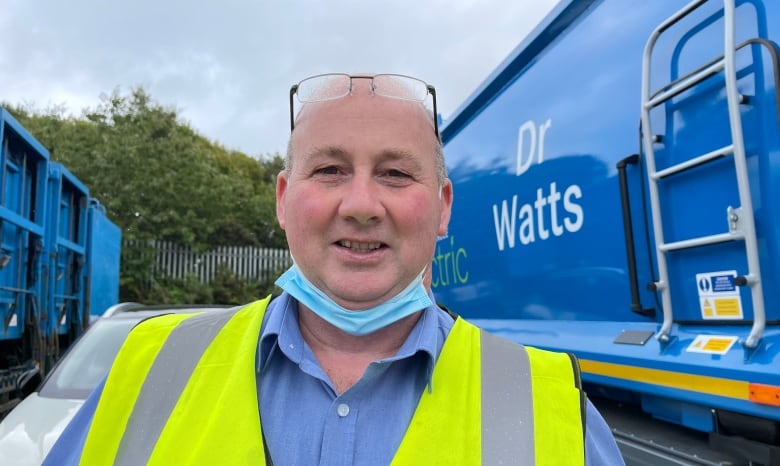 Public Works supervisor Bob Donnachie showed CBC News around Dundee in one of its new electric garbage trucks. This one is named Dr. Watts, in a nod to the partner of British detective Sherlock Holmes. (Stephanie Jenzer/CBC)

Crichton said that the city decided if it wanted to accelerate the electric transition, charging stations had to be where people parked — not just at their homes.

“Fifty-one per cent of the population in Dundee live in tenements (apartment blocks). So they do not have driveways,” he said. The challenge, said Crichton, was avoiding electrical cables running across sidewalks that people could trip on.

“You’ve got to plan and understand what you want your city to look like in 20 years, where you need to have vehicles moving about, where you want the taxis to be — and so forth.” 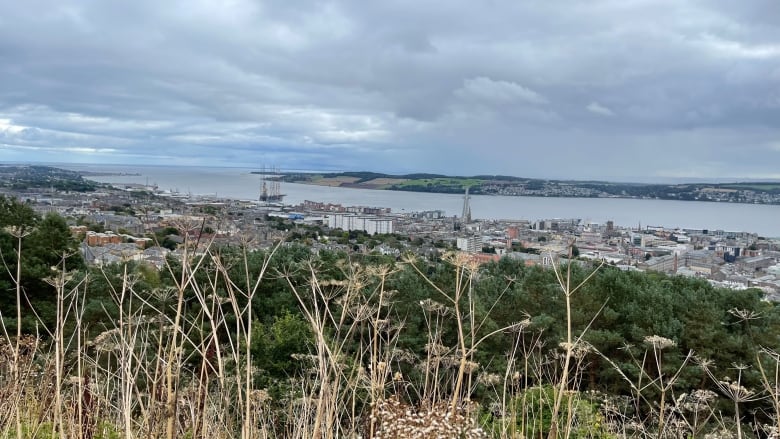 Dundee — population 150,000 — claims to be Europe’s leader in building up infrastructure for electric vehicles. (Stephanie Jenzer/CBC)

Dundee’s experience in trying to set the stage for the rise of electric vehicles reflects the thinking behind the Glasgow Declaration on Zero Emission Cars and Vans, signed Wednesday at COP26. The Conference of Parties (COP), as it’s known, meets every year and is the global decision-making body set up in the early 1990s to implement the United Nations Framework Convention on Climate Change and subsequent climate agreements. Under the declaration, more than 100 countries, cities, leasing companies and car manufacturers have agreed to work toward a 2040 deadline to completely phase out the sale of diesel- or gas-powered vehicles.

The pledge is meant to signal to consumers, governments, municipalities and the private sector that the EV revolution has arrived, and it’s long past time to make major investments in the infrastructure needed to support it. Canada has already set its own phaseout deadline for five years earlier — in 2035 — but is nonetheless a signatory to the declaration. “This is how you build critical mass momentum,” said Transport Minister Omar Alghabra in an interview with CBC News at COP26. “This is how you encourage others who are hesitating to make that commitment that they should jump on board and join us.”

Advocates for a low-emission future say Dundee’s experience shows why it’s essential for cities and towns to purchase electric vehicles for their fleets: They get the ball rolling on building critical EV infrastructure.

“Between 2016 and 2030, we’re going to need something around £40 trillion of investment worldwide, in order to take our transport systems on the right track,” said Maruxa Cardama, the secretary general of SLOCAT, an NGO that advocates for sustainable, low carbon transport. Right now, she said, renewables are responsible for powering only four per cent of transport worldwide. 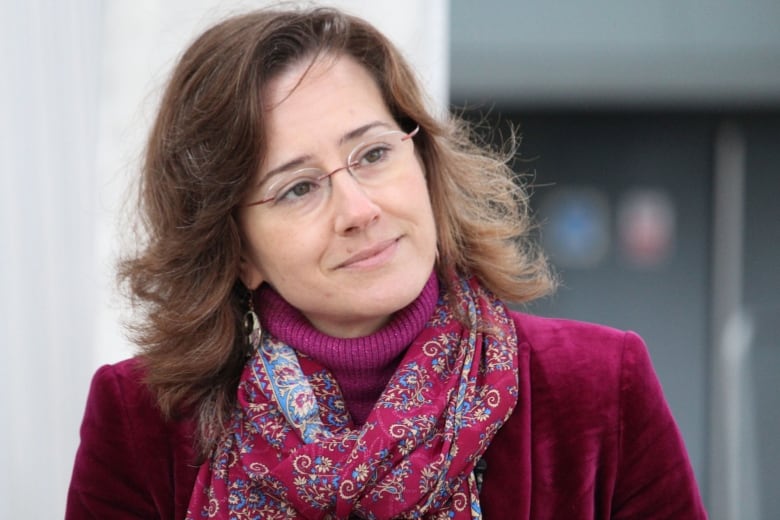 Maruxa Cardama is the secretary general of SLOCAT, an NGO that advocates for sustainable, low carbon transport. (Stephanie Jenzer/CBC)

For that number to really ramp up, Cardama said, governments will need to shift subsidies received by fossil fuel companies and channel them into electric infrastructure instead. “If we were to move all the fossil fuel subsidies the transport sector is currently experiencing into other ways of moving our vehicle fleets, perhaps the economics wouldn’t be so tricky,” she said.

The European Union has set a tentative date of 2035 for phasing out its gas- and diesel-powered vehicles — the same timeline as Canada. The U.K., which is hosting COP26, has announced an earlier deadline of 2030. The U.K. government estimates it will need 250,000 charging stations nationwide — 10 times greater than the existing number — in order to handle the expected surge of EVs by the end of this decade.

It has already set aside GBP1.3 billion (£2.1 billion Cdn) over the next three years to try to rapidly build up capacity. Alghabra said he believes the needs will be similar in Canada. “Our government has in our last budget invested half-a-billion dollars for infrastructure, for research and development,” he said.

Nonetheless, the vision of a zero-emission-vehicle future was far from unanimous at COP26. 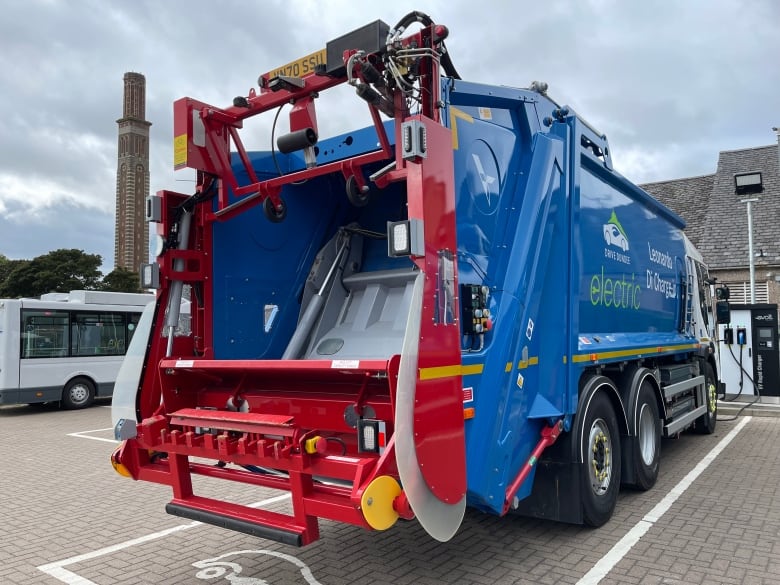 Big carmakers from Germany and Japan, including Volkswagen and Toyota, did not sign on to the Glasgow declaration. Nor did the U.S. or China, the world’s largest car markets. Automotive industry reps have said they are concerned about signing the pledge without certainty that the infrastructure will be ready.

But Fraser Crichton, Dundee’s EV fleet manager, says such declarations let cities like his know they’re on the right track.

“We need that guidance, especially from COP,” he said. “We have got to put that into action and it’s got to be done at a local level.”