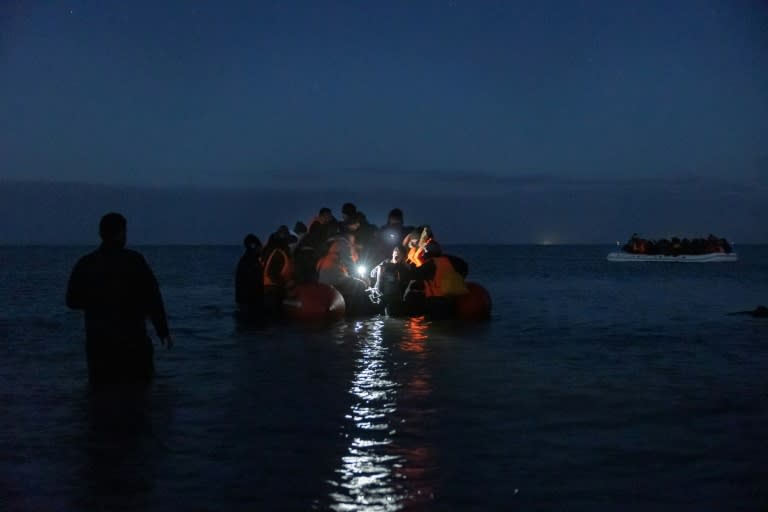 Three migrants have been reported missing after trying to canoe from France to England during a record day of crossings that was described as “unacceptable” by the British government. The French coastguard was alerted to the disappearances by two survivors who were rescued on Thursday morning shortly before a pair of canoes washed up near the northern port of Calais, French authorities said in a statement on Friday. According to British figures, a total of 1,185 people made the trip across the Channel on Thursday — a new record that smashed the previous daily high of 853 — due to cold but calm weather.

“The number of illegal migrants we have seen departing from France today is unacceptable,” said a spokesman from the British interior ministry late on Thursday. Several UK newspapers blamed France and particularly President Emmanuel Macron, with the Daily Mail running the headline “Macron’s Migrant Shambles”. An unnamed source told The Times newspaper that UK interior minister Priti Patel would be “raising this abject failure in the strongest possible terms” with the French government.

A spokesperson from the French interior ministry hit back, saying it was “unacceptable to be accused of using migrants and condoning the work of criminal gangs when our security forces are at work every day saving lives. “Using this issue for domestic political reasons is not the right way given the issues at stake.” In July, Britain agreed to give an additional 62.7 million euros (£73.8 million) to France for border security, adding to the hundreds of millions provided over the last 15 years to boost security around Calais and other ports.

Patel has previously attempted to tie the disbursement of the border money to higher success rates in stopping the boats, leading her French counterpart Gerald Darmanin to denounce what he saw as an attempt at “financial blackmail”. Relations between France and Britain are at their lowest point in decades due to a host of disagreements on issues ranging from migrants to fishing in the Channel, as well as a submarine contract with Australia.
Story continues

Last month, France threatened to impose extra customs checks on British goods and stop British fishing boats landing their catches in French ports unless a row over fishing licences is resolved. – Dire conditions – The number of Channel crossings has exploded since the phenomenon was first observed in a major way in 2018, with desperate migrants attempting the sea route to Britain in dinghies and other small vessels instead of hiding away in trucks or cars.

French police and coastguard say they face a difficult task trying to monitor hundreds of kilometres of rugged coastline with limited resources, while people smuggling networks are growing more and more sophisticated. The French have a policy of not intercepting boats once they are in the water, judging any attempt to stop the dinghies too dangerous because of the risk of panic or sudden movements that could capsize the vessels. Three people have died and four have disappeared during Channel crossings in 2021, including the latest incidents, while 29,360 people have attempted to reach England by sea, according to French figures.

This is nearly three times the number of people who attempted to cross in 2020. The mostly young male migrants and asylum-seekers from Africa and the Middle East live in abject conditions around Calais and other northern ports, often sleeping rough and depending on handouts from local charities. A priest and an activist have been on hunger strike in Calais for the last month to demand an end to police operations to confiscate tents and destroy temporary camps set up around the port.

Migrants regularly complain about mistreatment from police officers, who have been under orders to prevent the creation of any camps along the coast. France demolished a squalid settlement known as “the Jungle” in 2016 that at its height housed up to 10,000 people in tents and shacks. The ferry and train terminals around Calais are protected with five-metre (16-foot) fences topped with razor wire, while the port is equipped with full-truck scanners and even heart-beat detectors to identify stowaways.