Glastonbury festival-goers have said a festival-first Notting Hill Carnival parade perfectly “sums up” the event at Worthy Farm. Caribbean dancers in bikinis and feather headdresses marched through the site at Worthy Farm on Thursday after a new partnership between the annual street party in Notting Hill, London, and the Somerset festival was announced this year. Starting at Block9, the late-night party zone where Notting Hill Carnival is based for this year’s showpiece, a vibrant procession meandered through the roads that link Glastonbury’s stages.

Vibrant stilt walkers, some with skeletal or multicoloured faces, a large truck in the shape of a beetle and a lorry carrying more than a dozen steel pan players joined the parade – with many floats carrying DJs playing loud music to the thousands of Glastonbury revellers who turned out to watch.

“People are dancing, everyone’s having a great time, everyone’s following along, it’s great,” finance consultant and festival-goer Hollie Rowe-Roberts told the PA news agency. The 31-year-old from Colliers Wood in London came across the parade with her friends Alex Evans, a 37-year-old plumber and Nicholas Tsioupra, a 28-year-old airline pilot from Nottingham. “(Displays like this are) one of the best things about Glastonbury, because we’re off to Shangri La but you get stopped by something like this and you might never make it,” Mr Evans added. Chiara Beck, from Newcastle, said stumbling across the parade “sums up Glastonbury”.

“Just a lot of joy, a lot of fun and random things that you don’t expect – that’s Glastonbury,” she told PA.

Also among the wackier sights at Glastonbury on Thursday was comedian Paul Curry’s comedic act on a platform in the east of the festival. Dancing around a stage in a short white dress, the 48-year-old from Newtonabbey in Belfast had hundreds of onlookers singing along to famous songs reimagined to reference his two panda hand puppets – including the lyrics “Woah Black Betty, panda hands” to the tune of Ram Jam’s 1977 hit. “It’s just fun and just about joy, trying to make a bit of joy into the adult world,” he told PA after his performance. 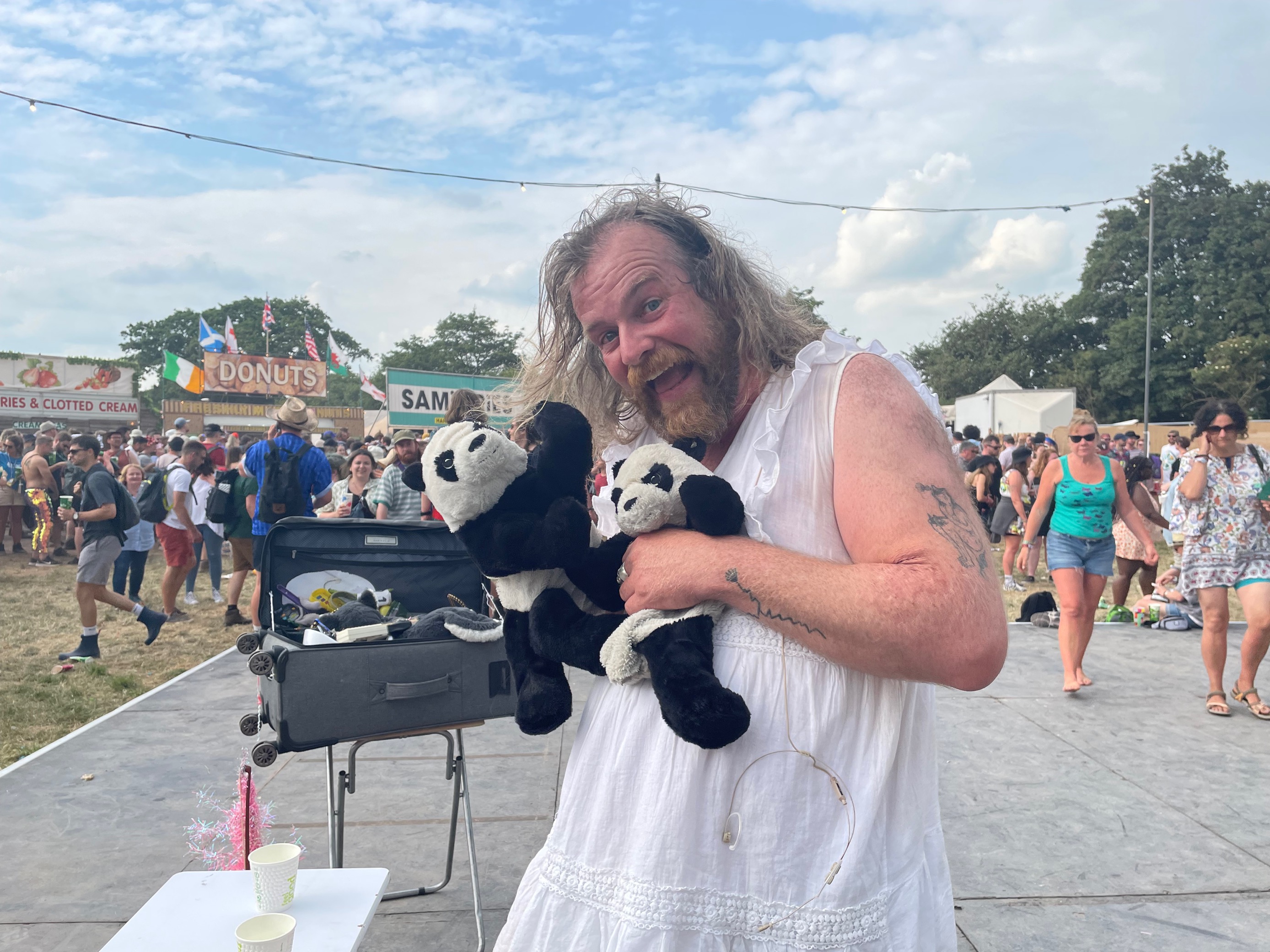 “It’s what Glastonbury is all about and it should be what living is all about… (if it was) we wouldn’t be bombing each other all the time.”

Mr Curry, who is doing two shows a day at Glastonbury, said he is inspired by early acts by American comedian Steve Martin but also by children he teaches at a circus school in Belfast.

“I owe much of my inspiration to two to seven-year-olds… they come up with just genius gold all the time and I’m kind of taking mental notes,” he said.