The Private Motor Truck Council of Canada (PMTC) has inducted four more truckers – Brian Smith, Jim Burrows, Bernard Jinks and Bill Walker – into its Hall of Fame for Professional Drivers. Together, the drivers have amassed 187 years and more than 18 million kilometers of accident-free driving. The announcement was made during the second day of its annual conference on June 9 at Niagara Falls, Ont.

The Hall of Fame is sponsored by CPC Logistics Canada. 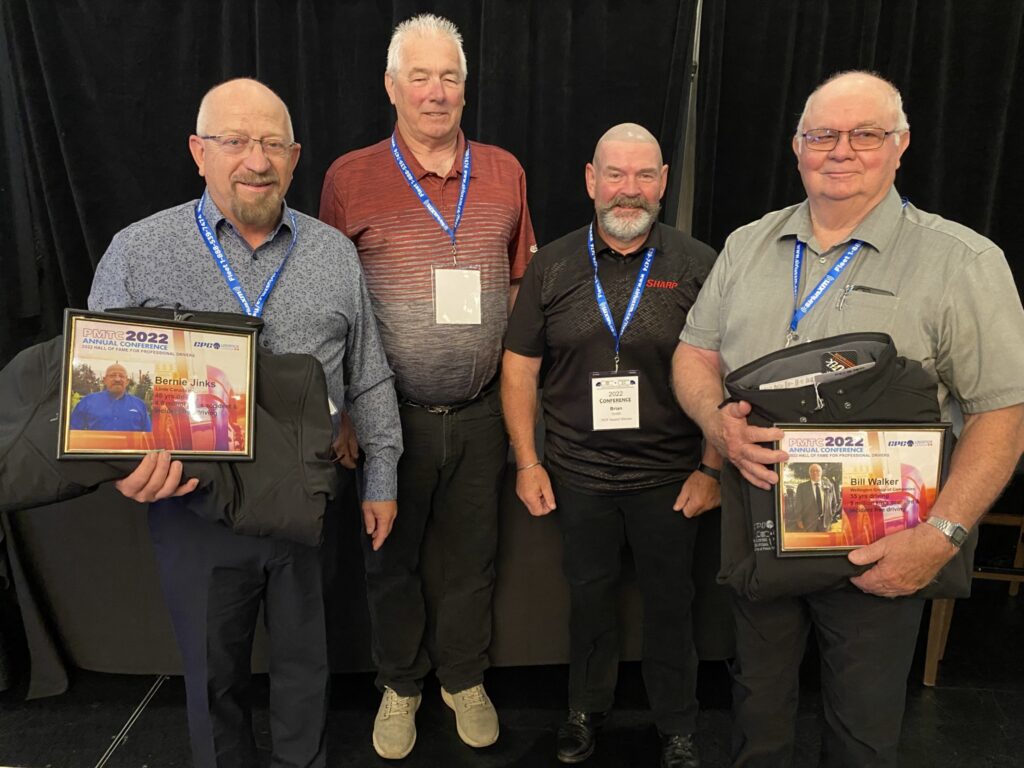 “The skills of professional truck drivers are evident to all road users, and are especially valued by their employers,” said PMTC president Mike Millian. “These professionals compile safe driving records that are beyond amazing, considering all the adverse conditions they face every day. Only a select few can equal the caliber of the drivers in the Hall of Fame.

The industry salutes these individuals, and we are pleased to honor them today.” Brian Smith, Sharp Transportation Systems Smith has amassed 4.5 million miles (7 million kilometers) of accident-free driving during his 45-year career, 14 of which — including the last five — have been with Sharp Transportation.

Smith started in the industry at the age of 17, working in the moving business and later hauled equipment for the TV sports industry, moving equipment for broadcasting junior and college football, baseball and soccer in the U.S. He is always the first to stop and help travelers in trouble on the side of the road, helping change tires and other repairs when needed and ensure if someone is stranded that help is on the way. Brian and his family are currently making plans to take in a family from Ukraine to assist with aid and relocation.

Jim Burrows, Air Liquide Canada Burrows’ driving career spans 41 years, all of which have been with Air Liquide, amassing more than 3.8 million kilometers of accident-free driving. He is very active in the local sporting community, having been involved in minor hockey as a coach and scout, as well as teaching skills to local youth.

Jinks has been driving for 46 years, the last 17 of which have been at Linde Canada, gathering 4.8 million kilometers of accident-free driving. He unofficially began his driving career at age 12, when his uncle would put his straight truck in low gear and tell Jinks to steer it straight down the field while they picked tomatoes at the farm. He has expertise in hauling dangerous goods and has trained drivers in different fleets.

In 2007 Linde asked him to take on the role of driver champion, which evolved into not only training new drivers but also assisting local management on various operational tasks. Jinks is active in his community and is involved in many charities and is part of the guest services team at the Central Community Church serving the Niagara Region. Bill Walker, Wellington Group of Companies

Walker began his driving career in 1967 hauling vegetables for his uncle. Over the past 55 years Bill has driven all over North America, amassing more than 5 million kilometers of accident-free driving. He has worked at Wellington Motor Freight since 2019, and is described as a very conscientious worker, with a great personality and a safety-first attitude.

As part of a Christmas charity drive, Bill and his wife Joyce spearheaded a campaign to bring flowers and decorations to a public funded retirement home that had been ravaged by Covid earlier in the year.

Bill and his wife have also volunteered at the same church for more than 55 years.