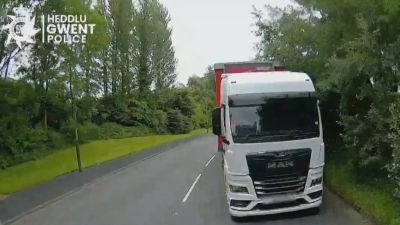 A HGV driver has been jailed after driving on the wrong side of the road – causing a head-on crash.

Mariusz Korkosz had 14 years’ experience driving HGVs across Europe, often in the UK, and had no points on his licence. He claimed he had a coughing fit on July 4 as he drove along the B4251 in Oakdale and crashed into a lorry driven by Gary Rees.

The aftermath of the head-on crash. Credit: Media Wales

Prosecutor Rob Simkins said: “This gentleman had delivered some goods at a factory unit in Pen-Y-Fan Industrial Estate shortly after midday. He left the industrial estate and pulled onto the access road.

There were parked vehicles blocking the left-hand side of the road, and so it is right that he had to manoeuvre round them.

It should have been obvious at that stage he was on the wrong side.

“He pulled out, taking a left turn and always on the wrong side of the road. The road takes a left-to-right turn on a blind bend and coming the other way, unfortunately, was Mr Rees in another lorry. He had no opportunity to avoid a head-on collision.

Both vehicles, it appears, were travelling at about 25-30mph. In a head-on collision, it’s a 50-60mph crash if you look at it that way. There’s no suggestion of drink or drugs, there was no police pursuit.

What happened didn’t happen out of spite or malice or hate, but it did happen and Mr Rees was seriously injured.”

Korkosz claimed he had a coughing fit on July 4 as he drove along the B4251 in Oakdale and crashed into another lorry. Credit: Media Wales

There was severe damage to both lorries and police initially feared the collision was fatal.

The first officer on the scene saw Korkosz lying on the side of the road near the scene. Mr Rees was trapped in his lorry and was initially unresponsive but then woke and was cut free from the vehicle by the fire service. He had “swelling in the skull”, three broken fingers, bruising to his right knee which had been crushed against the steering wheel, and pain all over his body, the court heard.

In his police interview, Korkosz said he had been a professional driver for 14 years without a single accident.

He told police: “I am sorry to the other driver. I would like to apologise to him and to you and your country.”

The scene left after the crash Credit: Media Wales

Mr Simkins continued: “He’d had a nasty cough on and off for a month or so, and he said that as he approached the junction he had a coughing fit, although there was audio on the footage and I didn’t hear any coughing fit. He said he became disoriented and went onto the wrong side of the road.”

In his statement around a week after the crash Mr Rees said: “The weather was nice and I was enjoying driving my truck.

I was coming round the bend and saw a vehicle coming towards me on my side of the road. I believe I tried to move out of the way but I had nowhere to go. I thought: ‘This is it, I’m going to die.’

“That’s all I remember [from before the collision].

I think I heard someone telling me to stay with them and not to die and they were holding my hand. I opened my eyes to see people all around me and half my lorry missing. I have never known pain like it.

My head hurt so much.”

Mr Rees said he was left with a “huge lump” which made his head look “so out of shape”. He added that he had been plagued by headaches and dizziness since the crash.

“One leg from the knee down has swollen to three times its normal size,” he said. “My jaw hurts when I try to eat. I have very swollen black and red eyes, I can barely see anything.

I do not know what the long-term damage will be.”

Mr Rees, who is a bouncer as well as a lorry driver, continued: “My wife is disabled and only works 15 hours a week. The loss of both my incomes is going to be very difficult. I do not know if I will be paid while off work.

My wife has asked me why I’m not angry and I can’t answer. Maybe it is because I am in the same profession as the lorry driver. I do not feel anger.

I feel compassion. I understand there must be consequences. However, I would hate to see him parted from his family for a long time.”Korkosz, who was physically unhurt, admitted causing serious injury by dangerous driving.

Francesca Edwards, mitigating, said her client had no previous convictions in the UK or his home country Poland.

“What happened that day was not the action of a reckless man,” she said. “He maintains he was coughing and sneezing when the collision occurred. Perhaps, more important, is that he saw stars in his eyes, as he describes it. He tells me he had been to see a pharmacist and bought over-the-counter medication, but not being in his home in Poland, he didn’t feel he could access a GP.”

Korkosz, who has a wife and two children in Poland, had travelled from the UK to Switzerland and Germany, then back to the UK before the crash.

Ms Edwards said he had driven in the UK on “many, many occasions” over the last 14 years.

Because of the language barrier he had been unable to speak to people since being in prison, which had resulted in a “catastrophic” impact on him, said Ms Edwards. “He has been unable to contact his family to explain what has happened to him,” she added. “He spoke to a doctor in prison last Friday who took it upon himself to make contact with Mr Korkosz’s wife so there was at least some explanation.”

The court heard Korkosz was “desperate” to return to Poland and worried his family might be unable to support themselves without him. He had been “overwhelmed” by thoughts of the crash and had no intention of working as a lorry driver again, Ms Edwards added.

‘Caused by a reckless act’

Passing sentence, Presiding Justice Nicholas Hobbs said: “We have given this matter a great deal of thought. The incident appears to have been caused by a reckless act.

On viewing the dashcam footage there is absolutely no evidence to justify your claim that you had a debilitating coughing fit.”

Mr Hobbs went on: “You had plenty of opportunity to move your vehicle to the correct side of the road and there were very serious consequences for the other driver.

We impose 20 weeks in custody and we see no reason to consider suspending the sentence.”

As he was led from the dock he asked through his interpreter: “Will I be able to talk to my wife?” Ms Edwards told the court: “I will come down and see him.”

The magistrates also banned Korkosz from driving for 24 months and 10 weeks.

He must pay a GBP154 victim services surcharge and GBP85 in prosecution costs.