‘Not believed to be any serious injuries’ after M6 lorry crash 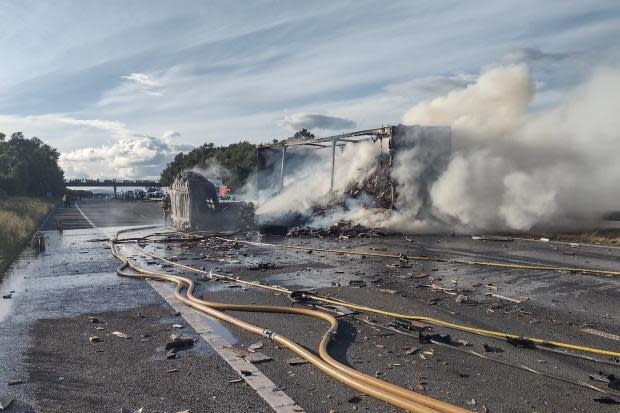 HGV crash on the M6 at Todhills

POLICE have said 'there are not believed to be any serious injuries' following the crash involving two heavy good vehicles on the M6 at Todhills last night (July 14). The crash between two lorries took place at 6.30pm, and subsequently left one lorry in flames. Following the incident, the M6 Northbound remain closed over the evening  between J44 (Carlisle North) and J45 (Gretna) for recovery work and resurfacing on the road.

News and Star: Aftermath as emergency services were on site

Aftermath as emergency services were on site

At the time, traffic was at a standstill on the Northbound carriageway and temporarily blocked on the southbound carriageway, whilst emergency service attended the scene including the fire service. A spokesperson from Cumbria Police said: "The N/bound carriageway is likely to remain closed until tomorrow afternoon (July 15) for recovery and resurfacing. "The northbound diversion is from J44 north on the A7 to Longtown, and then west on the A6071 to J45.

HGVs - Rockcliffe via the military road is not suitable for HGVs. Stick to the above diversion. There are not believed to be any serious injuries at this time," they said.