Detectives have released a photograph of a man who is suspected of being part of a conspiracy that led to the deaths of 39 Vietnamese nationals who were found in the back of a lorry.

The victims' bodies were found in the lorry trailer, which had been transported by ferry from Zeebrugge in Belgium to Purfleet in Essex, early on October 23 2019.

Essex Police want to trace Romanian national Marius Mihai Draghici, who is suspected of being part of the network which co-ordinated immigrants' journeys to the UK.

The 48-year-old is known to work in the haulage industry and has connections in the Bacau area of Romania as well as in Spain.

Draghici also goes by the aliases Marius Mihai Selaru and Marius Lupu and was born in the Romanian city of Onesti.

Essex Police said they are using a "number of tactics" to trace the suspect, and are working with international partners, and have also released a photograph of Draghici in the hope people can help identify him.

Chief Superintendent Stuart Hooper, who has overseen the investigation, said: "We have lived up to our promise of delivering justice but there is one final piece of that jigsaw to be completed.

"We'll be working with international partners and other agencies in order to make sure our appeal is heard far and wide.

"We are committed to tracking down every individual we believe to be connected to this most horrific of crimes."

Ten people have so far been sentenced for their roles, including four men who were in January jailed for between 27 years and 13 years and four months for manslaughter and plotting to people smuggle.

They were crime bosses Gheorghe Nica, 45, from Basildon, and Ronan Hughes, 42, of Armagh, and lorry drivers Maurice Robinson, 27, of Craigavon, and Eamonn Harrison, 25, of Co Down.

Detective Chief Inspector Louise Metcalfe, who is leading the investigation, said: "The investigation into the tragic deaths of the 39 Vietnamese nationals is the most complex ever undertaken by Essex Police.

"So far, we have brought 10 people to justice and achieved prison sentences of almost 100 years in total.

"But we made a promise to the families of those who lost their lives in Essex in October 2019 that we would not stop until justice has been delivered in its entirety.

"Marius Draghici remains an outstanding suspect and, just as we have promised and already delivered on, our pursuit for justice will not stop at our borders and frontiers.

"I would like to appeal to the public in Romania and indeed in Spain; help us locate Marius Draghici." 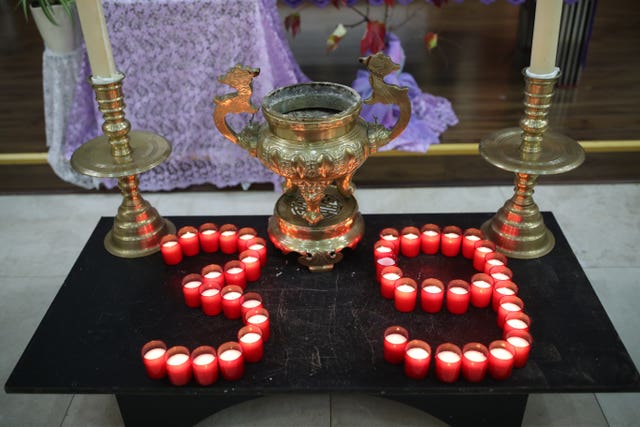 Candles laid out as part of the ceremony for the mass prayer and vigil for the 39 victims found dead inside the back of a truck in Grays, Essex, at The Holy Name and Our Lady of the Sacred Heart Church, London's Vietnamese church, in east London (Yui Mok/PA)

She said police "strongly believe he is linked to the conspiracy which tragically ripped apart the families of the 39 innocent Vietnamese men, women and children who died on our shores in 2019".

"The actions we believe he is responsible for cannot go unpunished," she added.

Police said Vietnamese partners have been briefed on the latest developments in the case.

Anyone who has had any dealing with Marius Draghici and believes they know of his whereabouts is asked to submit information via the police's online portal https://mipp.police.uk/operation/4201020119P15-PO6