A truck driver for a company used by Amazon was convicted of driving while high after he crashed into a ditch and was caught with a crack pipe, report says 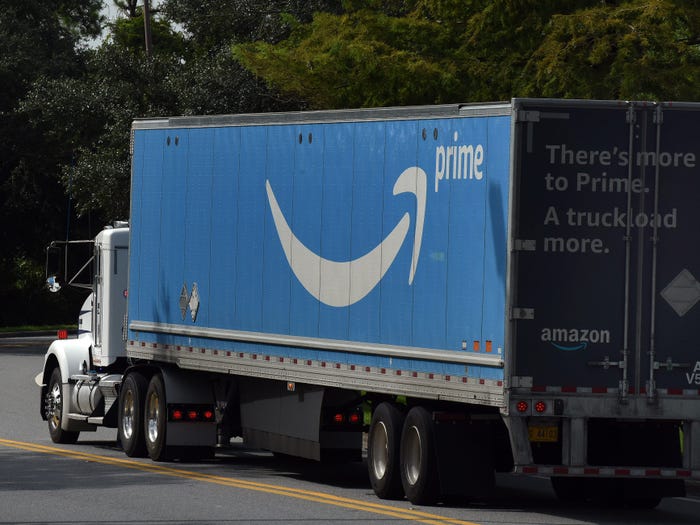 Redeem nowSign up for our newsletter to receive our top stories based on your reading preferences -- delivered daily to your inbox.LoadingSomething is loading.Email address By clicking 'Sign up', you agree to receive marketing emails from Insider as well as other partner offers and accept our Terms of Service and Privacy Policy.

A truck driver for a company used by Amazon was convicted of driving while high after he crashed into a ditch in Minnesota and was caught with a crack pipe, The Wall Street Journal reported. The online retail giant uses many external freight companies to help it transport goods and make deliveries. An investigation by the newspaper found that Amazon used some companies with unsafe driving scores that had raised red flags at the Department of Transportation.

Amazon told The Journal, which unearthed the Minnesota case from public records, that it would have cut ties sooner with the company in question if it had been aware of the crash. The newspaper did not name the company or give further details about the incident. Steve DasGupta, safety director of Amazon's freight unit, told the publication: "Our goal is zero accidents, zero fatalities.

We run a very safe network of tens of thousands of carriers." Amazon did not immediately respond to Insider's request for comment. Since 2015, trucking companies hauling freight for Amazon have been involved in crashes that killed more than 75 people, The Journal reported.

Amazon told the newspaper that the rate of fatalities per vehicle mile for its contractors was about 7% below the industry average in 2020. Per the report, Condor Riders, MJS Enterprises, and Marrosso were three companies used by Amazon whose drivers were involved in accidents that were sometimes fatal. Condor Riders, which is no longer trading, had an unsafe driving score that placed it among the most dangerous trucking companies in the US in March and April 2020, according to the DoT data reported by The Journal.

Edmund Miller Jr., 70, and Jose Luis Venegas Nuno, 36, died after an MJS driver crashed into a line of cars in October 2020 as they slowed down in northeastern Louisiana. The truck driver, Dilshod Abdurasulov, was fined for careless driving and still works for MJS. The company continued to be used by Amazon until at least September 2021, according to the report.

MJS declined to comment to The Journal. In April Insider followed a truck driver as he traveled cross-country to join a protest against vaccine mandates. The report highlighted how truck drivers work long hours, enough to equal two full-time jobs, without an adequate salary. Stay up to date with what you want to know.Subscribe to push notificationsClose iconTwo crossed lines that form an 'X'.

It indicates a way to close an interaction, or dismiss a notification.