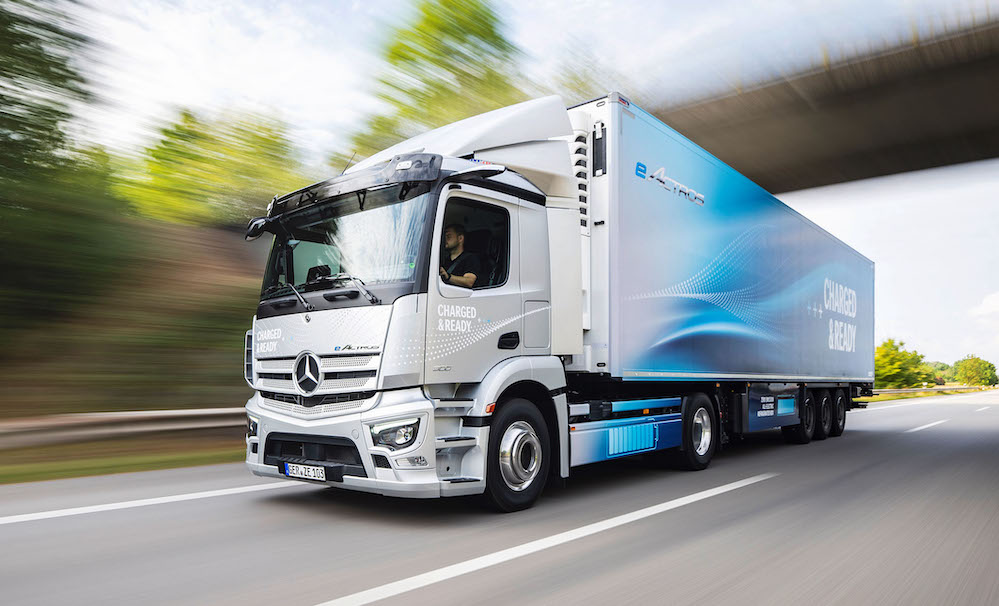 Following the market launch of the eActros 300/400 for heavy-duty distribution in 2021, Mercedes-Benz Trucks is not only consistently pushing ahead with the introduction of further battery electric models for this and the coming years, but also focusing on even more diversity and flexibility in applications for the eActros itself. At this year's IAA Transportation in Hanover, Mercedes-Benz Trucks is showcasing a wide range of new applications for the eActros. As a tractor unit for heavy-duty distribution transport, for example, it is available with an electric power take-off solution for hookloaders and skiploaders.

How Mercedes-Benz Trucks is expanding the application variants of the eActros consistently is demonstrated, for example, by the eActros 300 as a tractor. Production launch is planned for the second half of 2023. Particularly suitable for flexible use in heavy-duty distribution transport, the electric truck is based on the same technology as the eActros 300 as a solo vehicle or articulated train.

The vehicle with an M cab can tow all common European semitrailers, taking into account the maximum permissible overall towing length. As with the eActros 300, which has already been launched, the technological centerpiece is the drive unit, an electric rigid axle with two integrated electric motors and two-speed transmission. The two motors mounted centrally on the rear axle generate a continuous output of 330 kW (443 hp) and a peak output of 400 kW (536 hp).

The direct torque supply of the electric motors, coupled with the two-speed transmission, ensures powerful acceleration, impressive driving comfort and dynamics that enable more relaxed and stress-free driving compared to conventional diesel trucks. Three battery packs are fitted, with an installed capacity of 112 kWh1. The range is up to 220 kilometres2.  When driving with foresight, recuperation can recover electrical energy and increase range.

The battery-powered tractor can be charged with up to 160 kW: The three battery packs take just over an hour to charge from 20% to 80% at a standard DC fast-charging station with 400 A charging current3. As with all eActros models, the safety equipment includes the external Acoustic Vehicle Alerting System in accordance with legal requirements; fifth-generation Active Brake Assist technology with pedestrian detection capability; and the Sideguard Assist turning assistant. For visual warnings, the turning assistant uses the MirrorCam display, which is installed in the eActros instead of conventional mirrors.

The second-generation MirrorCam system, which has been available since April 2022, is now even better able to support the driver in many situations in road traffic thanks to, among other things, camera arms that are ten centimetres shorter on each side and new image parameters for an even more realistic representation of the surroundings. Mercedes-Benz Trucks will continue to expand its portfolio of medium-duty battery-electric vehicles for distribution transport. The manufacturer is already working intensively on the eAtego, which will be launched to the market in the next few years.

In addition to the eActros tractor, other applications of the eActros can also be experienced at this year's IAA Transportation 2022. For example, Mercedes-Benz Trucks showcases the all-in-one solution eWorX developed by ZF on an eActros in combination with a hookloader from MEILLER and a skiploader from PALFINGER. The aim is to efficiently electrify PTOs for operating hydraulic work equipment such as skiploaders, hookloaders, cranes or lifting platforms.

The advantage: complete local CO2-neutrality and greatly reduced noise generation, which makes it easier to use in cities and residential areas in particular. ZF's eWorX system establishes the connection between the vehicle's energy management system and body. To enable optimised operational efficiency, eWorX integrates components such as the electric motor, inverter, electronic control unit and application-specific software modules into a plug-and-work one-box solution.

Here is how it works: The traction battery of the eActros provides the ZF system eWorX with electrical energy via a DC interface. In turn, the eWorX electric motor drives, for example, the hydraulic pump for the hookloader or skiploader. A mechanical connection to the traction motor is therefore not necessary. eWorX ensures smooth communication between the e-truck and body via a CAN bus interface.

The two liquid-cooled electric motors installed in the eActros generate a continuous output of 330 kW (443 hp) and a peak output of 400 kW (536 hp). The batteries consist of either three (eActros 300) or four battery packs (eActros 400), each of which offers an installed capacity of 112 kWh4 and a usable capacity of around 97 kWh5. With four battery packs, the eActros 400 has a range of up to 400 kilometres6.

The eActros can also demonstrate its advantages in other body variants, such as a refrigerated box from Kiesling. For greater efficiency, the highly insulated refrigerated body has a cool-slide partition wall, which reduces the energy requirement of the cooling unit powered by the ePTO of the eActros by up to 40% and thus extends the range of the electric truck. At the end of use, the structure can also be separated into recyclable materials such as steel, wood, PU foam and aluminium.

The eEconic, also shown at this year's IAA Transportation, is technologically based on the eActros. It celebrated its trade show premiere at the end of May at IFAT 2022 in Munich and went into series production at the Worth plant in July. The eEconic is intended to cover the vast majority of routes typical for the Econic in single-shift operation without intermediate charging.

The electric drivetrain enables a level cab floor, which in turn makes it easier to climb through the cab - a particular advantage if the driver wants to get out via the folding door on the passenger side, exiting onto the pavement rather than into the path of traffic. The modern and intuitive Multimedia Cockpit also represents a significant upgrade compared with the conventional Econic. Another highlight of the vehicle is the panoramic, as well as coated and heated Thermocontrol windscreen, which prevents fogging up due to the weather and thus increases the clear view of the traffic area.

In addition, the windscreen reduces heating of the interior due to sunlight. A great safety advantage in urban traffic: The eEconic includes the turning assistant Sideguard Assist and fifth-generation emergency brake assistant Active Brake Assist with pedestrian detection as standard equipment. Mercedes-Benz Trucks provides its customers with an entire range of digital solutions via the Fleetboard Portal in order to maximise the use of all models of the eActros and eEconic, to integrate electric trucks into their daily routine in the best possible way, to save time and effort and to make the switch to eMobility as easy as possible.

This includes, for example, individually developed charge management for the creation of charging profiles and a logbook with detailed information on driving, standing and charging times. In addition, a mapping tool shows in real time where a vehicle is located, whether it is being driven, stationary or charging, and the charge level of the battery. The Mercedes-Benz Complete service contract is also available for the eActros and the eEconic to ensure optimum vehicle deployment.

The comprehensive service package covers workshop maintenance and repair of the complete vehicle, including the drivetrain and wear parts. The service contract always includes intensive customer support by Mercedes-Benz Uptime.The intelligent system records all relevant vehicle data, from tyre pressure and engine to battery status. In this context, Mercedes-Benz Uptime has already been expanded by more than 200 e-specific rules that continuously monitor charging processes or voltage curves in connection with the high-voltage battery, for example.

The information is also available via the new cloud-based customer portal. By connecting vehicles, Mercedes-Benz Service and transport companies, workshop visits become more plannable and unforeseen breakdowns can be significantly reduced. Irrespective of drive technology, every investment in a commercial vehicle must pay off for transport companies.

In addition, a whole series of questions must be clarified in advance, especially in connection with fully electric trucks: On which routes can I use electric vehicles? What about the charging infrastructure? What structural measures and investments can be expected for depot charging?

This makes it all the more important not only to sell customers an e-truck, but also to accompany them on the path to electrification of their fleet. After all, eMobility is more than just a new technology. This is precisely why Mercedes-Benz Trucks has integrated the eActros into a holistic ecosystem, which also includes consulting services for efficient vehicle use and optimisation of the Total Cost of Ownership (TCO).

For example, existing routes are used to determine the most realistic and meaningful usage profile of electric trucks for the respective customer in order to determine routes that can be driven with electric trucks. In addition to the electrification of the depot, all questions relating to planning, application modalities and implementation relating to the charging infrastructure, as well as the required grid connection, are also part of the so-called eConsulting, depending on the customer's requirements. For depot charging, Mercedes-Benz Trucks UK partners with EQUANS on electrical and installation work.

On request, there is also assistance in identifying possible public subsidies for infrastructure and vehicles in the various countries, regions and cities. For consulting on charging infrastructure, Mercedes-Benz Trucks and its project partner Netze BW, Services division, opened the charging park for customers in Worth am Rhein. E-truck customers can test charging stations and charging concepts from various manufacturers at the eTruck Charging Park and work with experts from Mercedes-Benz Trucks on site to develop tailor-made charging solutions for their specific applications.

1 Nominal capacity of new battery, based on internally defined boundary conditions, may vary depending on use case and ambient conditions.

2 The range was determined internally under optimal conditions, including three battery packs after preconditioning in partially loaded distribution traffic with a semi-trailer at 20?C outside temperature.

3 Based on internally determined empirical values under optimal conditions, including an ambient temperature of 20?C.

4 Nominal capacity of new battery, based on internally defined boundary conditions, may vary depending on use case and ambient conditions.

Based on internally defined boundary conditions, may vary depending on use case and ambient conditions.

6 The range was determined internally in optimum conditions, including 4 battery packs after preconditioning in partially loaded distribution traffic without a trailer at 20 ?C outside temperature.