The Israeli had just competed in the 50-kilometre walk at the 1972 Munich Olympics, and had been taking cuttings from local newspaper reports into the early hours of September 5, 1972 at his Olympic Village apartment in Connollystrasse.

He said he had not been asleep long when a team-mate jolted him awake.

In 1972, Israel sent 15 athletes in 7 sports to the Munich #Olympics. On September 6, 11 Israelis (5 athletes, 6 coaches) were taken hostage & murdered by the Palestinian terror group Black September. Holocaust-survivor Shaul Ladany was 1 of the athletes who was able to escape. pic.twitter.com/cFhobH6G9j

"Somebody touched me, I opened my eyes, and Zelig Shtroch, from the second floor of my apartment, is there," Ladany, now 86, told the PA news agency.

"He says 'Moshe has been killed by Arabs'. In the first split-second I thought he was joking. Zelig was my room-mate in Mexico City too and he was a big joker.

But in the next split of the second I realised this is something people don't joke about."

Ladany says "without thinking" he went to the door of Apartment 2, and found himself four or five metres from the man he now knows was Luttif Afif, the leader of the Black September Palestinian terror group.

Ladany returned inside, and those gathered in Apartment 2 left via a bedroom. Ladany recalls being the last to leave - and was the first to raise the alarm as he walked alongside his building to see the head of the Israeli Olympic mission in Apartment 5 rather than fleeing with the others.

Hostages were taken from Apartments 1 and 3 by Black September. Nine members of the Israeli delegation died when the German authorities' rescue attempt at the Furstenfeldbruck airfield went wrong.

Two others - including Moshe Weinberg, who Zelig Shtroch had mentioned to Ladany - were killed earlier by the terrorists after trying to fight back.

For many, such a close brush with death would be difficult to ever recover from, but Ladany said: "I don't think psychologically the Munich attack influenced me.

"Before coming to Munich there were attacks on Israelis and on Israeli airlines. I was aware of the risks. I am not afraid to die.

I am very cautious with everything, it doesn't mean that I want to die. But I am not afraid to die."

Four days after Ladany's fifth birthday in April 1941, the family took shelter in the laundry room of their home in Belgrade, during a German air raid.

"A bomb entered the house diagonally, hitting on the rear side, the second floor, the ground floor and entered the adjacent basement. Several people were killed.

Despite that near-miss, and the persecution of Jews across Nazi-occupied Europe, he says he never sensed anxiety from his parents and added: "I was never in panic. Maybe it forged our character, to be strong and to look forward.

"Maybe we inherited it from our forefathers, this kind of behaviour of never panicking, always trying to find a way out of very bad situations. This type of behaviour followed me in all my life.

"This navigated us through the war years and saved us.

In order for a Jew to survive the Holocaust he did not need a lucky event, he needed a series of lucky events and we had it. It's not just plain luck, but to navigate our way whenever obstacles occurred or whenever we assumed they might occur."

The family moved to Budapest, and in 1942 his cousins, Martha and Eva, came to live with them. They were the children of his mother's sisters, who along with the girls' fathers had been massacred in the Serbian city of Novi Sad.

Ladany's maternal grandparents died in the gas chambers at Auschwitz. 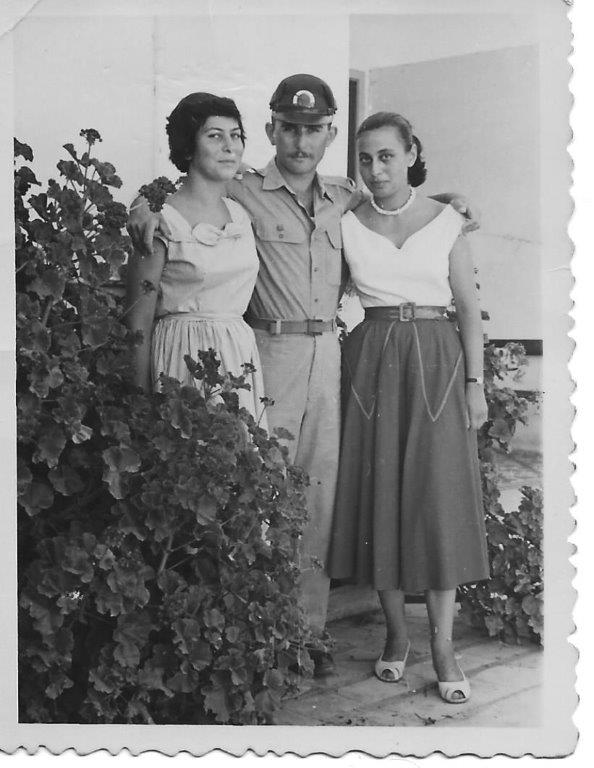 Shaul with his adopted sister Martha, left, and cousin Eva, in 1956 (Handout from Shaul Ladany/PA)

By March 1944, the Germans were in Hungary and working to deport Jews to the concentration camps.

"First my parents tried to save me, they put me in a monastery and hid my sisters with friends," Ladany said.

"My father took me at the age of eight to a monastery, we travelled in a coach with a yellow star on it. Before reaching the place, he turned the coat inside out so the yellow star would not be visible. He kissed me, he embraced me.

"A monk appeared, my father told him 'I brought a kid'.

The monk did not ask any questions - he didn't want to hear lies. He let me in.

86 year old Shaul Ladany completed the half marathon in 4 hours, 27 minutes. The two-time Olympian and Holocaust survivor represented Israel at the 1972 Olympics. ? pic.twitter.com/tnOTBirObC

"I have never had such an awful time in my whole life, it was the worst. Not because (the monks) had done anything wrong to me, not at all, but I was in trauma all the time, that (the Nazis) might discover that I am a Jew and that they might kill me.

"It was awful - an eight-year-old kid who thinks if he is discovered he will be killed and he has to hide his identity."

His father took Shaul from the monastery when Allied bombs started to land in Budapest, but the family were eventually taken by train to Bergen-Belsen.

"We were there for half a year, suffering from hunger, cold, abuse," Ladany said.

The family were able to get out as part of an agreement struck between the Nazis and a Hungarian-Jewish lawyer. Around 50,000 inmates are believed to have died at the camp.

Ladany describes reaching refuge in Switzerland as being akin to "arriving in paradise".

The family emigrated to the newly-formed state of Israel in 1948, where Ladany would develop his prodigious athletic skills.

Heading into the Munich Olympics, Ladany had set a world record for the 50-mile walk which stands to this day.

Shaul Ladany is an Olympic racewalker and was a professor of Industrial Engineering and Management for decades. He is also a Holocaust survivor. For Yom HaShoah, this is the incredible story of Shaul Ladany, one of the #Holocaust survivors who helped build Israel. pic.twitter.com/hLOolU2B3E

He recalls the efforts made by the West German organisers to avoid a strong military presence, following the Berlin Olympics of 1936 which Adolf Hitler and the Nazis used as a propaganda tool.

"The aim of the West Germans at that time was to show the world that Germany was not the military machine of the Third Reich, it was a democratic society," he said.

"Everything was in very nice colours, with many flowers."

Prior to the attack, Ladany had happily trained alone outside the Olympic Village. Even 50 years on, he remains scathing of the German response to the hostages being seized.

"Israel sent the head of Mossad (the secret service) and an Arabic interpreter to help, but (the Germans) did not want to hear any of his advice," Ladany said.

"They made up a plan. It was a very amateurish plan, and the execution of it was even worse."

Ladany is clear in his view that he wanted the Games to continue as a show of defiance.

"I stated that we should not withdraw, because then we are fulfilling the aim of the terrorists and many other countries to kick Israel out from sport and the Olympic Movement," he said.

Within a year of Munich he had become the 100km world race-walking champion.

But Ladany, an emeritus professor at Ben Gurion University in Beersheba, has never forgotten the atrocity that almost claimed his life, and attends memorials for the victims every year.

"Munich is a part of my life. Together with my history at Bergen-Belsen, both were unique and they forged my character. I don't know which one more or less," he said.

Ladany remains physically fit and from the age of 50 up to 83 he walked his new age in kilometres on his birthday.

Asked what his experiences had taught him, Ladany said: "I don't accept stupid regulations."

He says he refuses to wait for a green light to cross a road if he can see it is clear, and remembers how, on a visit to a Berlin university in the 1970s, he refused to 'report out' having reported in to the country.

"I decided knowingly not to report when I returned to Israel, and I was looked for for over 40 years," he said with a smile.

"My friend (in Germany) told me that periodically letters were sent searching for me (asking) what happened and so on. I told him, they can search for me for 100 years.

#WeRemember in Bologna. Two-time Olympic athlete Shaul Ladany and participants of the Run for Mem initiative.

Ladany is a child survivor of the Holocaust and the Bergen-Belsen camp - as well as of the Munich Massacre of the 1972 Olympics. #WeRemember pic.twitter.com/qC5FEc1at7 -- WJC (@WorldJewishCong) January 28, 2018

"In 1941, if my parents had obeyed orders in Belgrade, when you were told Jews had to report in or risk being shot, we would have been gassed in trucks.

"My parents didn't tell the truth.

We told them we were Hungarian.

"So I have learned for things that are very important, the truth is not what you should go with.