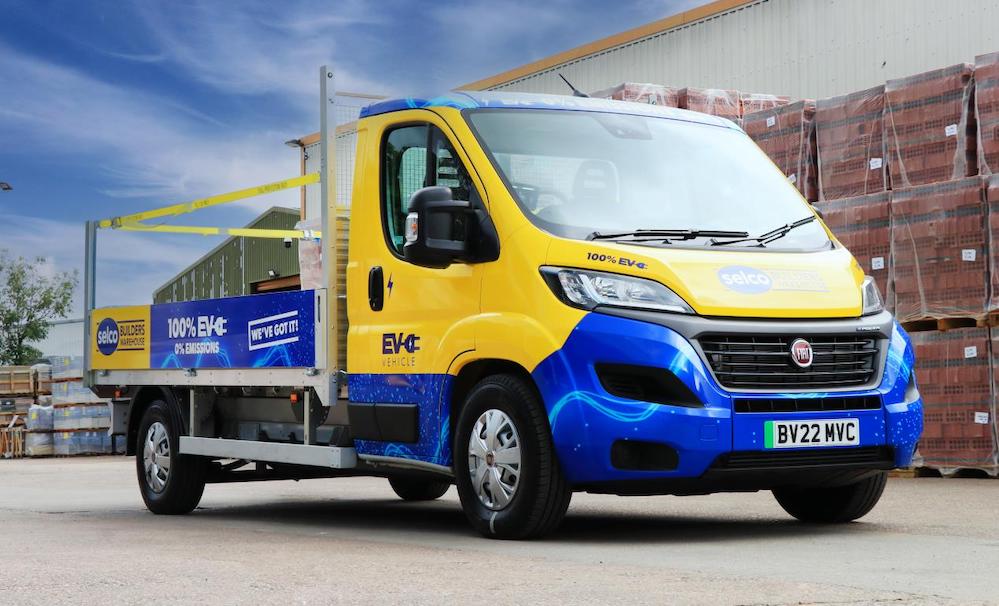 One of the UK's leading builders merchants has delivered an electric commercial dropside van to its fleet for the first time. As part of its commitment to operate more sustainable transport solutions, Selco Builders Warehouse has been adding cleaner fuel options to its fleet over the last 12 months. The latest development has seen Selco add an electric dropside vehicle, supplied by Guest Truck & Van, to the fleet operating from its Birmingham Delivery Hub for a trial period.

The vehicle has a payload in excess of 1,300kgs and a range of up to 145 miles. Richard Evans, Head of Transport Operations at Selco, said:

"This is an extremely important development in our ongoing transition towards operating a fully sustainable commercial fleet. Dropside vans make up a large percentage of our fleet so this trial will be crucial to seeking vital information on the suitability of commercial electric vehicles and help determine our route to zero emissions.

We have been clear about our commitments around sustainability and we are now making swift and sizeable progress in terms of reducing our carbon footprint within the transport fleet."

Selco has made impressive strides towards reducing its carbon footprint within its transport fleet in recent months. A dozen electrically powered counterbalance forklift trucks now feature across Selco's 73-strong branch network while there are seven Compressed Natural Gas vehicles currently in operation, with three to add later this year. Alternative, cleaner fuels have become an increasing part of Selco's fleet with all vehicles at its two Delivery Hubs in Birmingham and Edmonton now operating on either Compressed Natural Gas or Hydrotreated Vegetable Oil fuel.

In addition, Selco has also directly supported the planting of more than 260,000 trees across two sites in Scotland and Wales as part of its carbon-offsetting programme, with plans for a third 'Selco Forest' to be planted in early 2023.

With hundreds of trade brands always in stock, Selco's 73 UK branches are firmly focused on helping tradespeople complete their jobs as quickly and effectively as possible.

As well as offering trade services, Selco also has a strong digital presence including Click & Deliver and Click & Collect services and a new app to make life as convenient as possible for tradespeople.